Why You Should Be Scared Of Buying Fake Makeup

That knockoff Kylie Lip Kit and 200-peso MAC foundation are SO not worth it. Cosmo.ph gives you the real deal on counterfeit cosmetics.
by Kate Alvarez | Oct 24, 2016
Post a Comment
Featured

Anyone could've been fooled! Real MAC foundation (left) vs. its fake version (right).

Cosmo Quickie: This story at a glance!

Designer piracy is no laughing matter. According to the OECD (Organization for Economic Co-operation and Development), the counterfeit trade was valued at $461 billion in 2013, with 63.2% of knockoffs originating from China. While mostly designer bags, clothes, and electronics lead the piracy list, makeup brand MAC made it to the top 30.

In Divisoria, numerous stalls sell counterfeit versions of MAC, Kylie Lip Kits, L’Oréal, Anastasia, and Urban Decay, to name a few. The knock-off price can go down to 90% cheaper than the original.

In upscale bazaars and online shops, the price tag is only 20-50% cheaper. The price depends on the location and number of items you buy.

“Branded makeup can be expensive for the average person’s budget,” said makeup artist Bambi Dela Cruz. “But people think they’re getting something similar by buying fakes.” Some fake resellers even go as far as marketing their products as “Class A” or “Singapore/Hong Kong authentic” to fool buyers into thinking it’s practically the same thing. In reality, fake is fake. 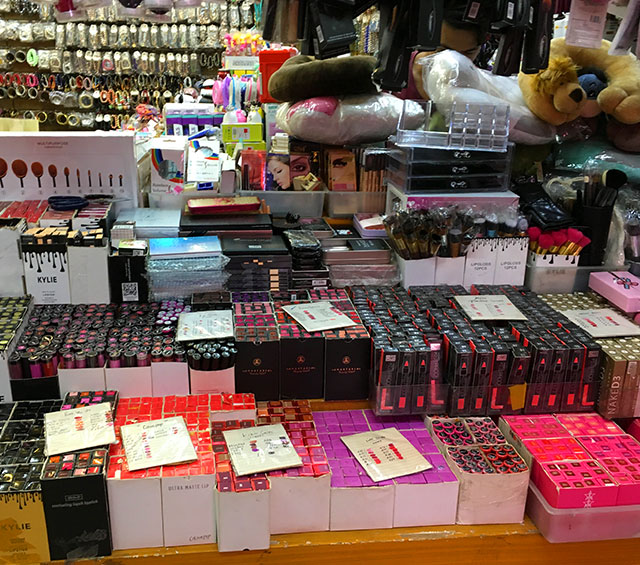 “The reason you’re not getting that foundation for a hundred [pesos] is that the company selling it has to account for overhead costs,” Liz Lanuzo wrote in projectvanity.com. “Most importantly, the cost of the product includes being certified as safe to use and sell by the requisite governing bodies. There are necessary permits that need to be obtained before it can be released in the market, and this is why your 1,000-peso foundation is not causing your face to break out in nasty hives.”

In Lanuzo’s blog post against fake makeup, the comments section turned into a heated debate between those against counterfeits and the pro side, which was made up of mostly online resellers and counterfeit users, many of whom turned to ad hominem attacks.

Another theory is that many covetable brands—such as Kylie Cosmetics and Urban Decay—aren’t officially distributed in the Philippines, which is why people turn to counterfeits.

Fake Is Hazardous To Your Health

“The cost of the health risks that come with purchasing fake makeup is never worth the money saved,” said Gay Lao, Brand General Manager of MAC Cosmetics Philippines. When MAC’s global team tested the fake products, they found traces of human waste, rat waste, and carcinogens.

The American FBI also conducted their own study of counterfeit beauty products and found traces of lead, copper, mercury, aluminum, bacteria, and carcinogens like arsenic, beryllium, and cadmium.

“I’ve encountered cases of contact dermatitis on the lips of my patients after they used cheap lip products they found in bazaars and online stores.”

“All cosmetic manufacturers are required to follow Good Manufacturing Practices (GMPs) for cosmetic products,” said Dr. Alexandra Villapol, M.D., Internal Medicine Specialist and Licensed Chemist. Counterfeit labs do not follow these guidelines strictly, and therefore have questionable sanitation. “Unsanitary means any condition or circumstance that can lead to contamination of the products with dirt, decomposed substances, and foreign matter,” she explained.

One of the metals with the most damaging effects on the human body is lead. “It is a neurotoxin that accumulates both in soft tissues and bones, affecting almost every organ and system in the body, with the brain being most sensitive to its effects,” Dr. Villapol added.

Aside from skin allergies, the ingestion and long-term exposure to the toxic chemicals can cause health hazards such as organ damage, poisoning, cancer, and neurological dysfunctions.

As for direct contact with rat waste, Dr. Villapol lists the following potential diseases: Leptospirosis, Rat-Bite Fever, Salmonellosis, Tularemia, and Hantavirus Pulmonary Syndrome, among many others. If the workers in counterfeit factories don’t pay attention to basic sanitation, there’s also a possibility of human urine and feces contamination via hand contact.


Her verdict: “I will not buy fake makeup anymore,” she told Cosmo. Scared of what may happen to her skin, Kristine removed all the products from her face after three hours. “The fake eyeshadow was not as pigmented as the original, the contour stick was cake-y and hard to apply, and the tools' performance [was] less than acceptable.” In her video, she noted that the fake MAC powder turned dark post-application, while the fake MAC foundation had a broken pump and smelled like melted plastic.

How To Spot Fakes

“There was always something off about the packaging, from the tiniest detail to the size of the logo, and something so obvious as a shade that we don’t even sell in our stores,” said Vanessa Vergara and Gaby Azarcon of MAC Public Relations and Artist Relations, after they found fake MAC makeup in tiangges and online stores.

According to makeup artist Bobby Carlos, it’s easy to tell the difference between real and fake if you’re a makeup junkie, but many are still clueless.

“The price is the biggest giveaway. If it’s too good to be true, then it’s a fake.”

But some resellers are devious. “We’ve seen online sellers price their fakes with just a small difference from our SRP to make the products seem more legitimate,” shared Tasha Santos, Benefit Cosmetics’ Digital and PR Executive.

“Research is key,” said Dela Cruz. “Know the brand and what lines they carry. Go to makeup counters and test the authentic products yourself to get a good feel of the texture, smell, and packaging.” Also visit the brand’s website to see their list of legit resellers and distributors. For more tips on spotting fakes, click here.

Cosmo.ph also came up with a side-by-side comparison in this video:


The Global Battle vs. Counterfeit

According to the OECD, counterfeit goods make up 2.5% of global imports. US, Italian, and French brands are the hardest hit by piracy. Most fake goods come from middle-income or emerging countries, with Mainland China as the top producer, followed by Hong Kong. In many cases, proceeds of counterfeit trade go towards organized crime.

It has become even more complicated with people selling real brands online for a cheap price. The catch? The items are about to expire.

Some have even created their own home labs where they mix original products with water and other ingredients so that they could sell more. (source: Mashable)

There are also people who hoard products as soon as they are released, and then resell them for an exorbitant price. Remember when Kylie’s first collection sold out in just a few hours? Frustrated fans could not wait for restocking, so they purchased Kylie Lip Kits from the black market for double the price.

The big brands are not ignoring this dent in the beauty industry. “We vigorously pursue counterfeiting operations and individuals responsible for the production, distribution, and sale of fake goods,” said Lao.

Last year, a 45-year-old woman from Florida was sentenced to 18 months in prison for selling counterfeit MAC products. Tina Oleszczuk sold fake makeup online for two years and made $961,744.75 off the scam, but the court ordered her to pay MAC almost $1 million dollars.

In 2014, L’Oréal Paris finally settled a lawsuit they filed against eBay back in 2007 for the sale of counterfeit L’Oréal products in the e-commerce site. The financial terms of the settlement remain confidential.

MAC continues to educate customers by directing them towards authorized stores, running hotlines for reporting counterfeits, and taking legal action to close down sites that sell fake makeup.

As for other brands like Benefit, L’Oréal, and Kylie Cosmetics, they regularly inform customers—via their website or social networking pages—where they could legitimately purchase their products. “We always tell them that the safest way to ensure they are getting original products is to buy them [directly] from us,” said Santos. Benefit Philippines expanded their distribution by joining Sephora.ph and adding new branches to reach more customers. Kylie’s website states that they don’t have retailers and you can order only from kyliecosmetics.com—and strictly three units per person per purchase to avoid black market hoarders.

“There’s nothing wrong with being practical in terms of choosing cosmetics,” said Dr. Onishi. “However, it’s always wise to look for FDA (Food and Drug Administration) approved products. It guarantees that the products are free from toxins and harmful chemicals.”

Here’s a tip from makeup artists and beauty bloggers: Try drugstore beauty brands. “You’ll be surprised that most of these items give a high makeup payoff sans the luxury price tag,” said Carlos. “There’s a treasure trove of makeup finds waiting out there.”

If you really want high-end brands but can’t afford it immediately, just save up for it. Also try waiting for sales, bundle deals, event freebies, and social media contests. The bottom line: Paying for cheap knock-offs is never worth the costly health risks.