Anne Curtis And Erwan Heussaff Aren't Engaged After All

1 After wedding inspirations blog Bride and Breakfast congratulated Anne Curtis and Erwan Heussaff for "the SWEETEST engagement" via its Instagram account on October 15, we got in touch with Anne's talent management, Viva Artists Agency, Inc., to verify the information. Its president and COO Veronique del Rosario-Corpus said, "It's not true, but I might be the last to know." Anne and Erwan have since clarified the rumor on Twitter:

Hahaha! Where did this news come from? Just got calls from my friends + my sister asking if I got engaged! LABO! Who kaya started the rumor?

Ummm if i were to propose guys, i wouldnt do it with cupcakes. You'd think they would make me look better in a fake proposal #fakenews #oops 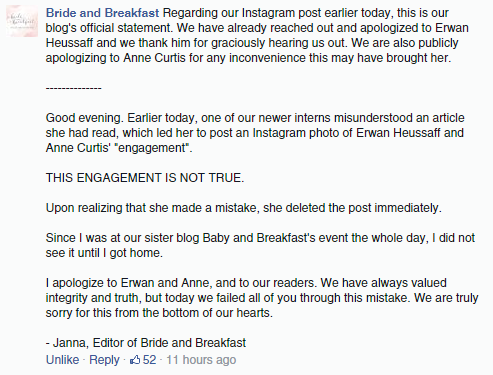 2 Neil Patrick Harris is hosting the 2015 Oscars! “It is truly an honor and a thrill to be asked to host this year’s Academy Awards. I grew up watching the Oscars and was always in such awe of some of the greats who hosted the show,” Neil said in a statement. The awards night will be on February 22, 2015. (JustJared)

3 Check out this video of Taylor Swift and cats. OMG. Taylor is a self-confessed cat lady, so what better way to promote her new album, 1989, than by surrounding herself with adorable kitty cats?

4 The NU Bulldogs wins this year's UAAP Men's Basketball Championship. The team defeated the FEU Tamaraws yesterday, October 15, with the final score of 72-57. It's the first time that NU has won the title in 60 years! Congratulations, guys! (Tiebreaker Times)

5 Paula Abdul teamed up with Avon Foundation for Women to make a catchy song for breast cancer awareness. The song even sounds like her 1988 hit, "Straight Up." Watch her video here!(TIME).

P.S. Avon Philippines also did their part and came out with the "Dibdiban Dance" starring Solenn Heussaff which encourages Filipinas to do a breast self-exam.