You wanted him, you got him! Summer's steamiest stud is now a certified Cosmo Centerfold. Did he go wild at his shoot? You bet!
by Jing Lejano | Sep 28, 2010
Post a Comment

You've seen him on the pages of Cosmopolitan Philippines, you've glanced at his billboards along the roads, and you saw him strut down the stage along with some of our popular and up-and-coming celebrities at this year's Bachelor Bash. This gorgeous young man from Las Vegas, Nevada is steadily becoming more than your average model.

Who is he? Bryann Foronda.

One of Summer 2010's Steamy Studs, Bryann caught your eye in our April issue and it looks like he never let go! You liked him so much, you snagged him a spot among our 10 Celebrity Centerfolds by voting him online and through ballots! Now that he's on the pages of Cosmo once more, get to know this handsome hunk a little better, as he tells you what drives him wild--in his own handwriting: 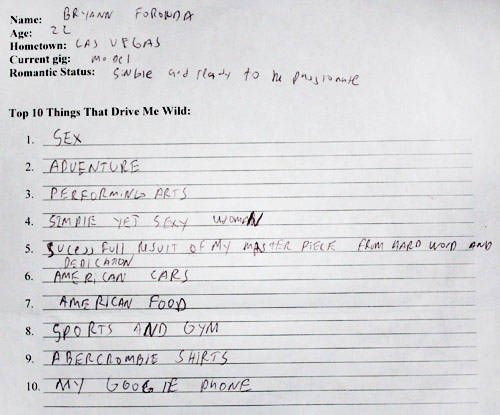