You saw his buff bod at the Bachelor Bash, now check out the behind-the-scenes action at this hot actor's Centerfold shoot.
by Jing Lejano | Sep 24, 2010
Post a Comment

There are a bunch of things everyone knows about Joross Gamboa. One of them is that he was from the same Star Circle Quest batch that launched Hero Angeles, Sandara Park (who's making a name for herself in her native Korea as part of popular girl group 2NE1), Roxanne Guinoo, Michelle Madrigal, and Joseph Bitangcol. Another is that he's since switched over to GMA-7 and is a certified Kapuso. And since his stint as a 2010 Centerfold, another obvious fact is that he has a seriously hot bod. ("'Yung katawan ko, pwede nang pagnasaan!" he joked to PEP.)

But one thing you won't know about Joross until you meet him in person is that he's a genuinely funny, quick-witted guy who seems to have mastered the poker face. A great body is a big plus, of course, but there's nothing better than a guy who can keep you laughing. Just wait 'til you see our exclusive video interview!

Since this year's Cosmo Men supplement was all about getting wild, we asked Joross to list 10 things about women that drive him wild. He asked us if he could list things that drove him wild in good and bad ways, and we told him it was totally okay. He might not have listed all 10, but he gave pretty interesting answers anyway! 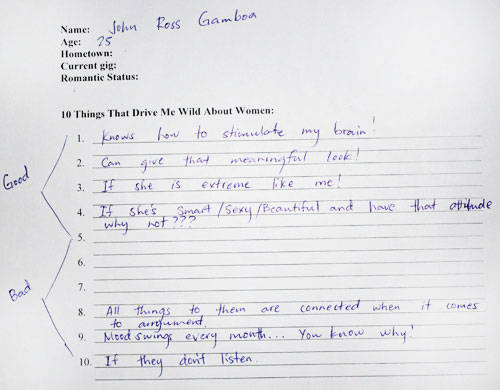 Click through to the Gallery below to see exclusive behind-the-scenes photos from Joross' Cosmo Centerfold shoot at Ark Avilon Zoo in Tiendesitas!