He took it all off onstage for Equus. Now the young theater actor dares to bare for the Cosmo Men shoot!
by Jing Lejano | Sep 27, 2010
Post a Comment

Given his boyish, earnest demeanor and his clean cut good looks, at first glance, it's easy to peg 21-year-old theater actor Marco Manalac as the stereotypical boy-next-door. Truth be told, it's a role that suits him.

He's that cute guy you crushed on all throughout high school and college. He's admittedly a little geeky (professing an undying love for all things Spiderman), and that only adds to his charm. He's smart, he's polite, he's well-spoken, and your mom would probably be really glad if you were dating him because he's just so nice.

But this up-and-coming talent has a wild side, and surprisingly, he lets it loose for the world to see—on stage. Marco bared it all under the theater lights for the local run of the controversial play Equus, playing the same daring role as Harry Potter actor Daniel Radcliffe. It's probably the wildest thing he's done, but he says that getting naked was actually one of the easier parts of portraying the role of Alan Strang in Equus.

He took his all-out attitude to his wild Cosmopolitan Philippines shoot at Ark Avilon Zoo in Tiendesitas, and dared to bare yet again as a 2010 Cosmo Centerfold. Since he's a sweetheart by nature, we asked him: What are the 10 things you've done (or are willing to do) for love? Here are his answers: 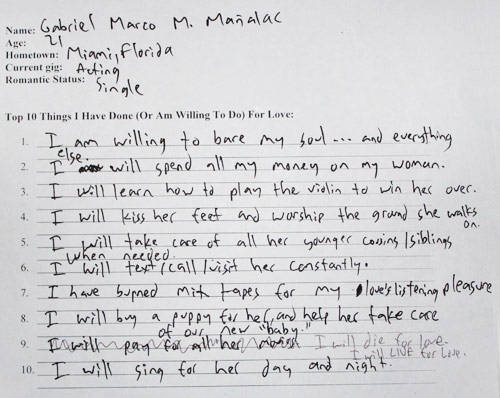