When Kathryn Bernardo celebrated her debut in March, she wore designer party girl dresses made by Francis Libiran and Vania Romoff. Oh, she also danced with some fine gentlemen during her 18 Roses segment—Robi Domingo, Enrique Gil, and Daniel Padilla, to name a few. NBD.

4. SHE HAS HER OWN FAN MAGAZINE. 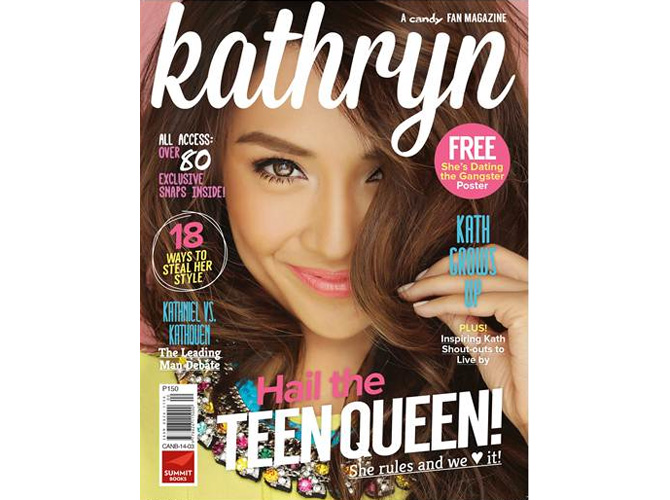 Y'all can get a copy for P150 at any magazine stand or National Bookstore nationwide.

3. SHE HOSTED HER OWN LIFESTYLE SHOW.

You know you've made it big when you get your own show. The teen star had a quick stint as a host when she did "Experience Kathryn in 15 days," a short series that was viewed exclusively on ABS-CBN's mobile app. Kathryn dished out on what she keeps inside her bag, her favorite books and movies, and some little known facts about her family.

2. GOT TO BELIEVE HAPPENED.

Where she starred opposite cutie Daniel Padilla. The show was basically a hit during its entire run. The final episode, which aired on March 7, got the highest ratings EVER. Meaning: It was the No. 1 show in the Philippines during that day. Oh, and it was soo popular, clips of the show aired on a Thai talk show, so boom KathNiel went GLOBAL. Like we said, NO BIG DEAL.

We won't lie to you. We're really looking forward to seeing Kathryn in her second movie team up with Daniel in She's Dating The Gangster. The plot is simple: Girl and Guy get into a pretend relationship. But Girl and Guy eventually fall irrevocably in love with each other. Not impressed? We all know it's the simple storylines that turn into blockbusters. Seriously, just look at Twilight. Soon, Kathniel will be the next Box Office King and Queen. Just you wait!