She reacts to netizens saying Aljur will leave AJ eventually.
by Steph Esguerra Olarte | 6 days ago
Post a Comment
Featured

Actress AJ Raval's mom Alyssa Alvarez is reacting to netizens' negative comments following her daughter's confirmation that she and Aljur Abrenica "understand" and "care for each other."

Aside from AJ, Alyssa has two other children with Jeric Raval: musicians Vanessa Raval and Ace Raval, otherwise known under the rapper name Drizzy Ace.

In a Facebook post on Friday, Alyssa shared a photo of Ace with Aljur, drawing comments from netizens.

Ace's caption read, "Sila galit, kami, steady lang." His post was uploaded about a month before Kylie Padilla confirmed her separation with Aljur. 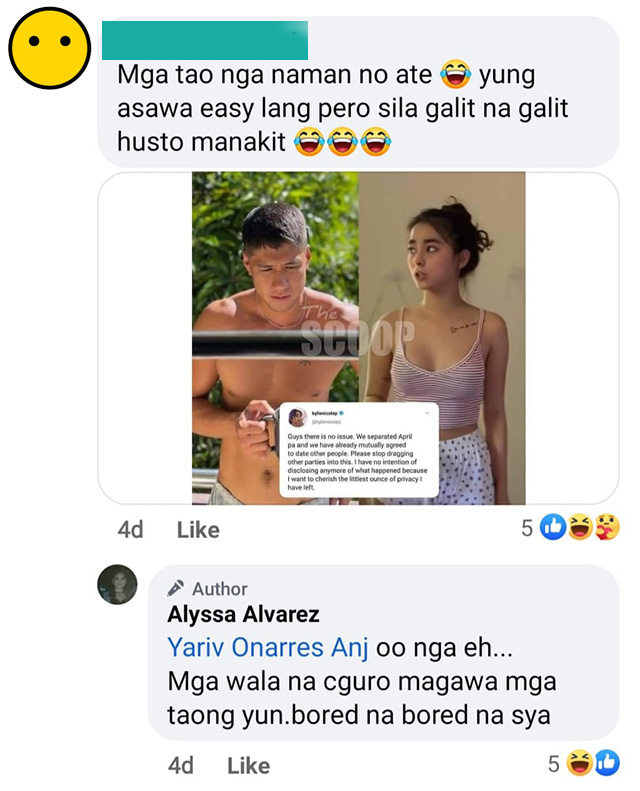 Another netizen said that if Aljur left his wife Kylie, he would certainly do the same to other women.

The same netizen answered back, emphasizing that since it's Aljur's nature, he will do the same again and again.

"We can never tell what tomorrow may bring," Alyssa replied.

The netizen apologized to Alyssa, explaining that he just thinks Aljur is playing a "gentleman" and that "AJ deserves better."

In a July 2021 interview, Kylie's dad, Robin Padilla, revealed that Kylie and Aljur had gone their separate ways and that a third party had been involved.

When rumors of Aljur dating female celebs started circulating, Kylie said in a tweet that "there is no issue."

"We separated April pa and we have already mutually agreed to date other people," Kylie said. "Please stop dragging other parties into this. I have no intention of disclosing any more of what happened because I want to cherish the littlest ounce of privacy I have left."

A few days later, photos went viral of a masked couple at a mall holding hands while walking, whom netizens identified to be Aljur and AJ.

In a recent interview with PEP, Kylie said that she just wants Aljur to be happy.

Currently, Aljur and Kylie are focused on co-parenting their children, Alas Joaquin and Axl Romeo.