Pia to Alden: 'Please tell your fans not to get mad na!'
by Jocelyn Dimaculangan for Pep.ph | Oct 29, 2019
Post a Comment

When Alden Richards was not acknowledged in an Eat Bulaga! segment on October 26, fans used social media to express their anger for the oversight.

The GMA-7 actor was a presenter for the winners of the Miss Millennial 2019 segment on the noontime show.

Alden was tasked to present the second runner-up of the contest, along with SKAL International chairman Robert Lim Joseph Jr.

However, EB host Pia Guanio did not acknowledge Alden and only introduced Mr. Joseph Jr.

Pia used Instagram to address the issue the following day. She made an appeal to Alden by writing: "Please tell your fans not to get mad na! Wag na mag-away! God bless you all!"

Subsequently, Pia edited her Instagram post, which now has the caption: "So proud to be part of a segment that aims to show how beautiful our country is."

The hashtag #LabyuALDEN became a top trending topic on Twitter as fans commented on the blunder. 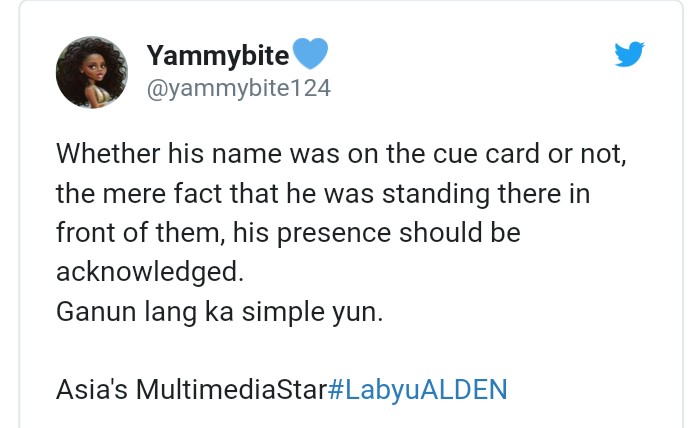