Alex Gonzaga drew flak on Twitter after netizen @jerichorayel called out the actress-vlogger for her "insensitive" actions in her recent vlog entry.

The netizen posted a snippet of her vlog to point out how Alex cracked some jokes around a group of guys.

These sound bites were paired with comedic sound effects.

@jerichorayel pointed out in his tweet that Alex was "so insensitive on so many levels especially now that the government is out there killing people tagged as drug users."

This tweet seemed to have reached Alex on Twitter, prompting the ABS-CBN star to issue an apology.

Tagging @jerichorayel, she said, "To some people who find my humor annoying and [insensitive], sorry. "How I wish you may never see or click any of my videos again. Lalo na sayo @jerichorayel kasi sobra na galit mo at tinag mo pa ko. Pero sa mga natutuwa, tuloy tayo!!!" 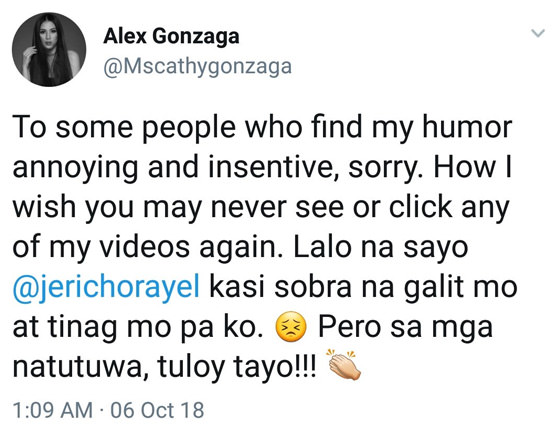 This tweet was later deleted by Alex after she and the netizen sorted things out through direct messaging on Twitter.

This wasn't the first time Alex drew flak for her actions.

Earlier this year, a short video clip of Pia Wurtzbach's December 2017 guesting on ASAP Chill Out made rounds online after Alex was caught touching the upper part of the beauty queen's chest.

In an interview with PEP.ph in February 2018, Alex defended herself by saying that it was only a joke.

Alex acknowledged that her humor was not for everyone.