The Star Cinema actress does a Claudine Barretto and moves to another film giant.
by Dinno Erece | Oct 21, 2009
Post a Comment
Featured 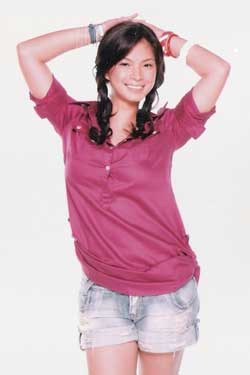 Right at the heels of Claudine Barretto, who made the surprise move from being Star Cinema’s princess to becoming a Viva Films contract star, is another would-be signee of Viva Films: none other than Angel Locsin.

The local grapevine is buzzing about the meeting supposedly held between Angel and Viva Artist Agency, the artist management department headed by Ms. Veronique del Rosario Corpus. There are two supporting facts for this rumor: one, Angel’s contract with Star Cinema is supposed to end this year; and two, her co-talent under Becky Aguila, Jennylyn Mercado, is supposedly signing up with VAA, too, for a co-management agreement.

Again, we turned to our insider to verify this, and we were given two answers, too. For one, with regard to the meeting, our source has heard nothing formal but that yes, there happened to be a conversation about it, albeit only casual. The more intriguing addendum to that, which our source insisted we should write, is that “it wasn’t Viva who initiated the talk.”

If this is true, Angel could still be an ABS-CBN princess as well as a Star Cinema contract artist but will now be co-managed by VAA—an arrangement being enjoyed by several artists now, although not in that sort of ‘combination.’ A very good example is John “Sweet” Lapus, who is a Star Magic artist under ABS-CBN but is an exclusive artist of GMA-7. As we previously reported, Claudine recently forged the same arrangement, as she is now a Star Magic queen and Viva Films star at the same time.