We're Obsessed With The ~*Friendship*~ Of Belle Mariano, Angelina Cruz, And Esnyr Ranollo

ICYDK, Love is Color Blind, the follow-up project to Belle Mariano and Donny Pangilinan's wildly successful debut series He's Into Her, will be released on December 10, 2021. The movie also stars Angelina Cruz, Jeremiah Lisbon, and Esnyr Ranollo. Esnyr is a TikTok star that is known for his funny and relatable skits about ~classic~ Pinoy school experiences.

Throughout the shooting of the film, the five of them grew close and their friend group—also known as 5ever—often joke around with each other online. You can really tell how close they've become through their kulitan and banter, and we're sooo here for it! Check out some of their cutest interactions online:

The five stars managed to squeeze in a group dinner despite their busy schedules. We love their ~family~ pictures! 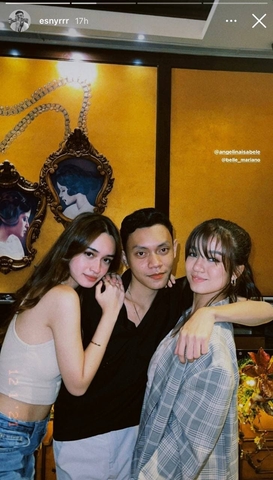 This picture of Belle and Esnyr reminds us of the signature pose of Christian Andrei, one of the most popular characters in the ~Esnyr Cinematic Universe~.

This picture of Esnyr and Angelina being "plastik" to each other is comedy gold.

We were waiting for Belle and Esnyr to do the "Twinnem" TikTok trend, and they did not disappoint!