She's topped everything from TV awards to Twitter followers, and we're honoring her for her success! See what happened when we met up with Anne at her Fun, Fearless Female shoot.
by CJ de los Santos | May 27, 2011
Post a Comment
Featured 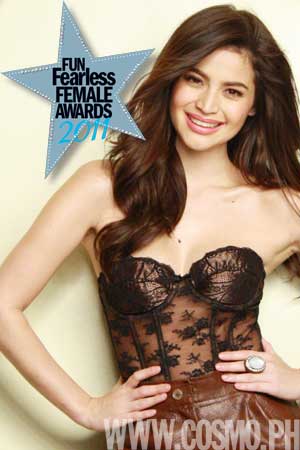 At 26, Anne Curtis is a seasoned pro in the showbiz world. Having been discovered at the young age of 12, the Filipino-Australian starlet has been shooting from one success to another as an actress, TV host, VJ, and product endorser.

Anne is such a visible personality that it seems she's tackled everything. At our Fun, Fearless Female Awards Night, she revealed her plans to release her own line of makeup soon. And most recently, she strutted her stuff on the runway at Philippine Fashion Week for L'Oreal.  She can currently be seen as a host on Showtime, and opposite Jericho Rosales in the remake of the Koreanovela Green Rose, both on ABS-CBN.

Her stunning beauty combined with her knack for wacky comedy has made her a press darling and gained her a loyal fanbase. She's had a love/hate relationship with the internet, due to scandals and triumphs that have made her an even more popular figure. But at the heart of it all, Anne is just a girl who's in the spotlight for doing what she loves.

We nabbed this multi-talented Ace Actress (and five-time Cosmo cover girl!) as she posed for her Fun, Fearless Female shoot. See what happened on the set as she joked with the Cosmo team and spread her contagious lust for life. Browse behind-the-scenes photos when you launch the gallery, and watch for her video interview on CosmoTV!

Plus: Check out the contents of her green Goyard bag and red Goyard bag!