If you're going to cover a Ryan Gosling song from La La Land, you might as well look your best self. Last week, Ansel Elgort took to Instagram to share a video of himself crooning fans with "City of Stars," performed twice in the film (first by Ryan Gosling's Sebastian along a pier at sunset and again at his piano with Emma Stone's Mia when they're a lovely couple). In true Ansel form, he didn't just sit there and sing to a track. Nope. He played the piano, sported his usual messy hair, put on a crystal necklace, and sang the damn thing from the comfort of a $1,020 (P51,000) Prada shirt. And it wasn't just any $1,020 Prada shirt—it was a shirt everyone talked about last fall after all the Fashion Weeks happened. Even Kanye wore it at one point. The shirt, called Impossible True Love, features a drawing of Cleopatra and Elvis making out (even though Elvis looks more like Chris Pine, IMO).

Anyway, at one point, Ansel looks at the camera (you), perhaps because he got a new text message, or maybe he was just looking at a photo of Ryan Gosling for inspiration. 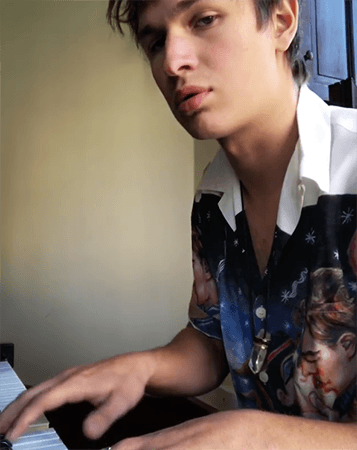 Either way, are you still alive?