1 Dingdong Dantes' ex-girlfriend Antoinette Taus says she's ecstatic about Marian Rivera and Dingdong Dantes' engagement! “I’m really excited that they decided to take this next step in their relationship. I think it’s really about time at marami na ding naghihintay para makagawa na rin sila ng maliliit na Marian at Dingdong of their own,” she said. She also shares that she's open to the possibility of her and Dingdong reuniting for a project now that she's returned to the Philippines! (ABS CBN)

2 Jake Ejercito speaks up about his split with Andi Eigenmann. After Andi's interview with The Buzz last Sunday, Jake took to his social media account to air his side of the story, as he's currently abroad to finish his studies. He even calls Andi his "greatest love." (PEP.ph)

RE: The Buzz First of all, I don’t deny that I’m not a perfect partner or boyfriend. I’ve apologised to Andi (cont) http://t.co/SO5Pta5RBL 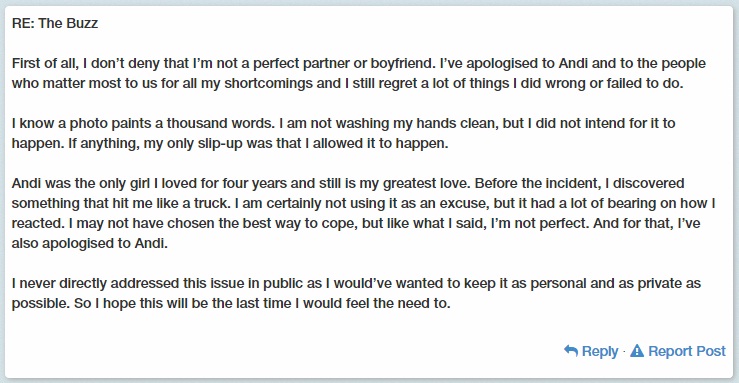 3 Kyla and Rich Alvarez reveal that they already got married prior to their church wedding in 2011. The couple shared that in April of 2011, they already had a civil wedding ceremony after dating for seven years. "Kasi we wanted to travel pero hindi ako pinapayagan to travel alone with Rich. So sabi namin let's get married na," Kyla told Kris Aquino during an interview. The singer and basketball player have been married for three years and have one son. (ABS CBN)

4 John Legend recorded a song for the Fifty Shades of Grey film in Manila. Before his much-anticipated concert held in Araneta Coliseum last Friday, John Legend was reportedly holed up in a sound studio in Mandaluyong. “He recorded a song which I guess is for the upcoming movie Fifty Shades of Grey because that’s the name of the pro tools project file that came from him,” Boyet Carlos Aquino, a recording engineer at Spryta Productions, told Yahoo! Philippines. (Yahoo)

5 The plot of Magic Mike XXL has been released: "Picking up the story three years after Mike bowed out of the stripper life at the top of his game, the film finds the remaining Kings of Tampa likewise ready to throw in the towel. But they want to do it their way: burning down the house in one last blowout performance in Myrtle Beach, and with legendary headliner Magic Mike sharing the spotlight with them. On the road to their final show, with whistle stops in Jacksonville and Savannah to renew old acquaintances and make new friends, Mike and the guys learn some new moves and shake off the past in surprising ways."(Just Jared)

BONUS: Here's a photo of Channing Tatum on set: