Ari with a ponytail is pretty. Ari with her hair down is GORGEOUS.
by Retty Contreras | Nov 10, 2014
Post a Comment
Featured

We're pretty darn proud of Ariana's achievements, but let's take a moment to discuss other EMA highlights, like, you know—her hair.

Here's Ariana in her now-defunct Nickelodeon TV show Sam & Cat, where she sported her then-signature red 'do:

People were so obsessed about Ari's red hair that she decided to post this on her official Facebook page in January: 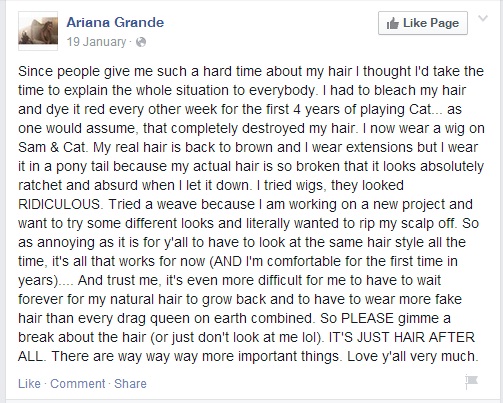 After breaking free (get it?) from her teeny-bopper roles, she turned to rocking different variations of her signature tight high ponytail:

But for the MTV EMAs, she finally went out with her hair like this and WE ARE FREAKING OUT BECAUSE WE LOVE IT:

Also, check out the full list of winners at the 2014 MTV EMAs below: