Ever since Cara Delevingne and Ashley Benson were spotted leaving a Lauryn Hill concert in May, many have wondered about their relationship status. It's been a wild few months for the Her Smell co-stars, who have shared multiple selfies and PDA moments together—Ashley even has a necklace with both of their initials on it—but Ashley's latest Instagram comments, which were accompanied with a healthy side of dirty talk, actually confirm the two are dating.

Spotted by Instagram account @CommentsByCelebs, Ashley wrote "Mine" under one of Cara's photos around the time they were promoting their new movie at the Toronto International Film Festival.

And under the "Mine" comment, Ashley wrote, "I can see your" and added some sushi emojis, which, according to Urban Dictionary, sushi emojis mean a shaved vagina or to have unprotected sex. 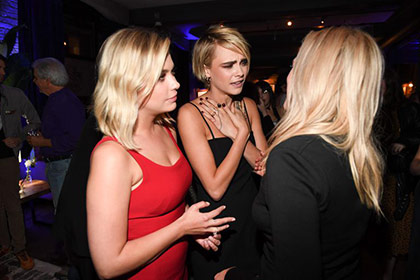 Of course, Ashley could've just been quoting the seagulls from Finding Nemo, but this sounds an awful like a relationship confirmation, tbh.