Whoa, Bea Alonzo Is One Of Variety's 'Asian Stars: Up Next' Awardees

Bea Alonzo is the only Filipino included in Variety's 2019 list of Asian bets for international stardom.

Hollywood trade publication Variety included Bea in a list titled "Asian Stars: Up Next," which was released on November 28, 2019.

The International Film Festival and Awards Macao (IFFAM) and Variety picked eight actors from all over the region as "Asian Rising Stars."

Bea will be one of the eight Asian Stars: Up Next awardees at the IFFAM that runs from December 5 to 10, 2019.

The ABS-CBN actress will receive this honor along with Yoona of South Korea, who gained popularity as a member of the K-pop group Girls' Generation.

The other recipients are Ryota Katayose of Japan, Lien Binh Phat of Vietnam, Asmara Abigail of Indonesia, Bhumi Pednekar of India, and Praewa Suthamphong and Jennis-Oprasert of Thailand.

According to Variety, they came up with this list "to help Asia's talent cross borders onto an international or global stage."

In past editions, two more Filipinos were cited for being "big screen talents poised for a global breakthrough."

Piolo Pascual was included in the list in 2017 while Anne Curtis made the cut in 2018.

Here is the description of Bea Alonzo in the Variety article:

"Born in 1987 in the Philippines to a British father and Filipina mother, Alonzo is a TV and film actress with a number of popular primetime soap operas and box office hits under her belt.

She began her career in 2002 with ABS-CBN, the biggest entertainment group in the Philippines, as an actor and host of long-running musical variety show ASAP.

Alonzo made her screen debut in 2003 with My First Romance and has won multiple acting awards in her home country, including best actress for her role in The Love Affair at the 34th Luna Awards and movie actress of the year for her performance in the box office hit A Second Chance at the 32nd PMPC Star Awards for Movies in 2016."

Bea gained international attention via the Star Cinema film Eerie. It had its world premiere at the opening of the Singapore International Film Festival on December 3, 2018.

In the movie, Bea played a clairvoyant guidance counselor at an all-girls Catholic school.

The supernatural horror film has been available for streaming on Netflix since July 2019.

"So, today, I was featured on Variety for being one of the awardees for the Asian Stars: Up Next showcased by IFFAM (International Film Festival and Awards Macau).

What a great feeling to be recognized along with the other stars from different Asian countries for their body of work.

Thank you @variety for the feature. I am beyond excited to be able to represent the Philippines in Macau this coming December." 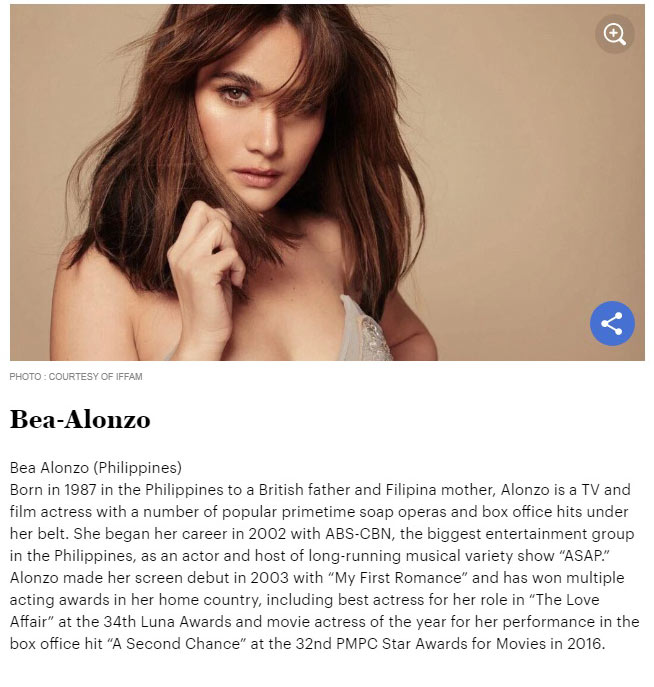