Behind The Scenes With Cosmo Centerfold Hall Of Famer MARC NELSON

Eleven years since his Cosmo Centerfold debut, we're still mad for Marc! Be blown away by this hunk's timeless sex appeal by checking out our outtakes from his shoot.
May 14, 2012
Post a Comment
Featured 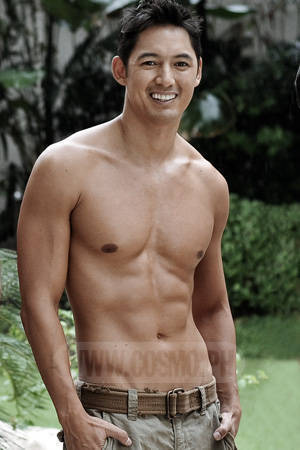 If there were ever a living, breathing definition of "God's gift to women", it would be Marc Nelson. Armed with wit and charm to go with his spanking good looks, this hunky Adonis has been making Cosmo girls kilig since 2001!

Born Marc Saw Nelson, the Australian-born, English-Burmese-Chinese-blooded babe used to visit the Philippines in the 90s just for its diving spots. But Pinay chicks knew better than to let this stud go back down under. Case in point: he was named Cosmo Centerfold in 2001, and then again in 2002. He's been a mainstay on our shores since.

Because of his undeniable good looks, Marc became a favorite on the catwalk, and later, the face of Bench Underwear. With a wonderful personality to match that sexy stage presence, Marc eventually made a name for himself as a TV host, taking on shows such as the then-ABC-5 dance program Eezy Dancing, ABS-CBN's Sports Unlimited  with Dyan Castillejo, and the AXN magazine talk show The Duke with buddy Rovilson Fernandez, who was also his partner in The Amazing Race Asia 2.

Get a dose of Marc's timeless sex appeal by viewing outtakes taken at his shoot as one of our "15 Hottest Hunks Ever!"