Behind The Scenes With May 2011 Man On Fire RAYVER CRUZ

Cosmo caught up with the hot actor and dancer at his casual Man On Fire shoot. See why the whole Cosmo team was completely enamored with him.
by CJ de los Santos | May 19, 2011
Post a Comment
Featured 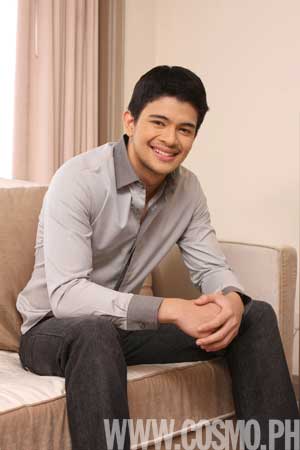 Everyone's talking about Rayver Cruz. In recent months, the 21-year-old actor was thrust into the spotlight due to a controversy involving his girlfriend Cristine Reyes and ex Sarah Geronimo. Their issues have since been resolved, but we've still got Rayver in the hot seat—as this month's Cosmo Man On Fire!

The actor and dancer has always had a busy showbiz schedule. He was last seen on the big screen in Shake, Rattle and Roll XII: Isla Engkanto, and he recently concluded his ABS-CBN teleserye Precious Hearts Romances Presents: Kristine. He continues to display his suave dance moves on ASAP, making his loyal fangirls swoon over his talent and charm.

Since it's our anniversary month, when we sat down with the actor at his Man On Fire shoot, we quizzed him about his views on Fun, Fearless Females, relationships, and the women he looks up to. Watch our video interview with him on CosmoTV (click here)!

Rayver seemed so quiet and serious when we started the shoot, until he flashed us that cute smile and joked around with the rest of the team! Click on the gallery button to view behind-the-scenes photos of him lounging in the comfy bedrooms and luxe lobby of the Midas Hotel and Casino in Pasay City.


Grab a copy of Cosmopolitan's May 2011 issue with Venus Raj on the cover for Rayver's Man On Fire feature!