Bella Hadid is kissing and telling! Or, actually, she's not-kissing and telling. After multiple outlets (and multiple eye-witnesses, to boot) reported that the supermodel was seen kissing her ex-boyfriend The Weeknd at Poppy nightclub's Coachella pop-up on April 13, 2018, Bella is SHUTTING S#*T DOWN.

Specifically, shutting down reports of her Coachella rendezvous with The Weeknd on E! News' Instagram post, where she commented a simple-yet-sassy "It wasn’t me." 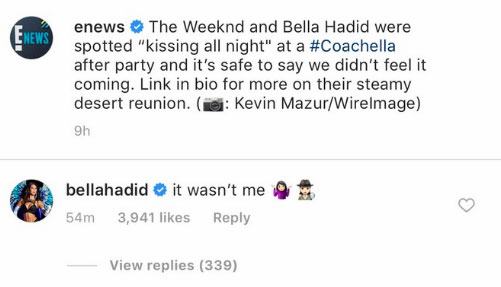 The Weeknd was also seen getting PDA-y with Chantel Jeffries, so maybe everyone at that Poppy pop-up just has extremely bad eyesight and got them mixed up.