Why Bianca King Kept Quiet About Sofia Andres' Pregnancy: 'It's not my story to tell'

Sofia Andres revealed on June 21 that she’s a mom to seven-month-old Zoe. She timed the announcement on Father’s Day, when she greeted her longtime partner Daniel Miranda and shared snippets of her life in Australia via a three-and-a-half-minute Instagram video.

Sofia stayed in Australia with her boyfriend while waiting for their daughter Zoe’s birth, and her close friend Bianca King happened to be in the same country (Bianca is still based in Australia).

Bianca and Sofia’s friendship began when they starred together in the ABS-CBN afternoon teleserye, Pusong Ligaw, which aired from April 2017 to January 2018.

On June 22, Bianca shared a short video that featured snippets of her cooking videos with Sofia. Comments about Sofia’s body—about her baby bump, to be exact—flooded the post. Bianca replied to some saying that the videos were taken in February 2020, when Zoe was already three months old.

There was one netizen who praised Bianca for keeping Sofia’s secret. Bianca replied, "of course naman. Its not my story to tell. [smile emoji] im just here to support her." The netizen also commended Sofia’s other friends who knew about the pregnancy—Kathryn Bernardo and Hannah Pangilinan—for respecting the new mom’s privacy.

Another netizen said that Bianca keeping mum about Sofia’s pregnancy made their friendship stronger. But, Bianca clarified that they were already close even before Sofia gave birth. "Well we were this close already before Zoe arrived. even while we were working together 2 years ago, we were super bonded," she replied. 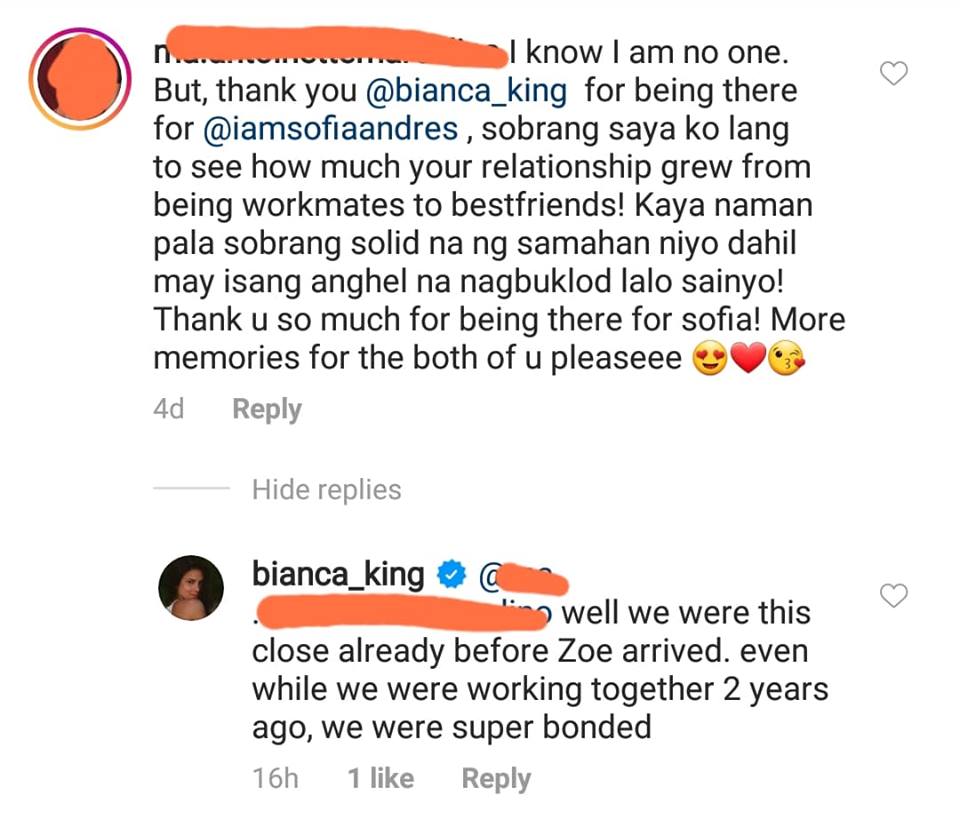 There were also netizens who found it nice that the two remained close even after their show ended. Sofia left a comment on the post: "I love you very much [smiling face with heart eyes]", and Bianca replied with: "@iamsofiaandres I love you too [two girls and hearts emojis]."

The two also have photos together in their respective IG accounts, which is pretty telling of their fondness for each other.

The article you read was translated from Filipino to English.