Up to this very messy situation the couple now finds themselves in.
by Olivia Blair | Apr 15, 2018
Post a Comment
Featured

You'd be forgiven for being slightly confused about what the heck is going on with Brooklyn Beckham and Chloë Grace Moretz.

First they were on, then they were definitely off, then they rekindled their relationship and everything seemed oh-so delightful and lovey-dovey until... woah... what's that?... Is that Brooklyn in a tattoo parlor kissing another girl?!

How did we get here? Let us delve into their relationship history:

After reportedly meeting at a Soul Cycle class—that's spinning to you and me—15-year-old Brooklyn and 17-year-old Chloë are pictured skateboarding in Santa Monica, California.

Hmm the pair might just be good friends at this point, despite the dating rumors, and Chloë is seen holding hands with a guy that was not Brooklyn. In fact, it's a guy called Julian Moraes.

Wait, what? We can't keep up! Just a few days later, Brooklyn and Chloë are spotted leaving an Ed Sheeran concert in LA. Chloë Instas videos from the night but, alas, none include Brooklyn. Maybe the guy she was holding hands with before was just a good friend?

Well, well, well what do we have here? It's Brooklyn and Chloë again, this time at the Made In America Festival in Los Angeles... with Jaden Smith? 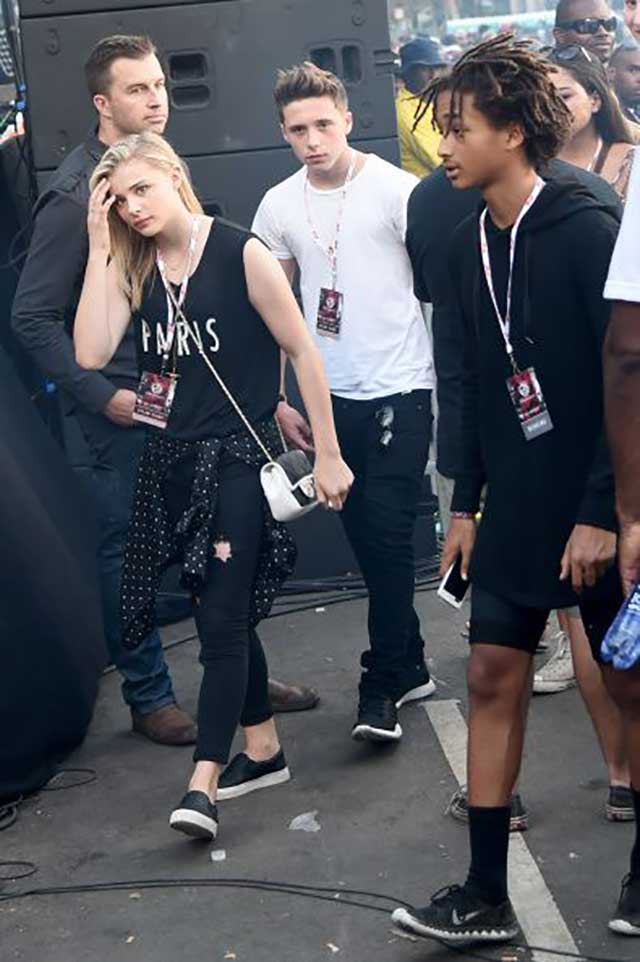 Chloë graces the cover of Teen Vogue and talks about Brooklyn, saying: "What I find really interesting about Brooklyn—and what I really love about the kid—is that he is passionate about what he wants, which is to be a professional soccer player. And I enjoy someone who is on my level with the seriousness kind of thing."

I mean, he ended up releasing a photography book a few years later but we're all for switching things up. Plus, he is only 15 at this point.

Chloë coyly dodges a question on Watch What Happens Live about her relationship status with Brooklyn, simply saying: "He's a very good guy and he's a good person, I enjoy hanging out with him."

When pressed by host Andy Cohen if she just didn't want to put a label on it or define it, she gave a little bit more away: "Maybe..."

She went on to give heaps of praise to Victoria Beckham and the whole clan. THAT'S NOT WHAT WE WANTED TO KNOW THOUGH, IS IT CHLOE?

Brooklyn and Chloë apparently split up and reportedly unfollow each other on Twitter. Noooo!

Randomly, Selena Gomez is asked on Watch What Happens Live if there's any truth to a supposed rumor that Brooklyn dumped Chloë because he fancied her.

Brooklyn is pictured having his face caressed by model Sonia Ben Ammar at an LA concert. What's interesting is that the Mail Online reported that Chloë is at the same concert and "missed her rumored ex-boyfriend by minutes." Oof.

Chloë appears on the cover of Complex and denies being in a relationship with both Brooklyn and erm Chance the Rapper(?) She says she's "been into dating" but doesn't want anything serious.

"I have no real plans, I don't want anything right now. I can't handle that right now."

One month later and it seems like Chloë has flipped 180 her desire to be a single gal as rumors that the couple is back together go into overdrive when aspiring photographer Brooklyn posts one of his famous black and white images of himself and Chloë looking all cuddly on Instagram:

What follows is then a number of other Instagrams, including a super cute one posted by Brooklyn featuring Chloë and a takeaway, where he refers to her as "bae." If that's not a show of relationship seriousness, I don't know what is.

Chloë's back on seemingly her fave show Watch What Happens Live and is asked again about her relationship with Brooklyn in light of the recent Instagrams.

WE HAVE CONFIRMATION, PEOPLE 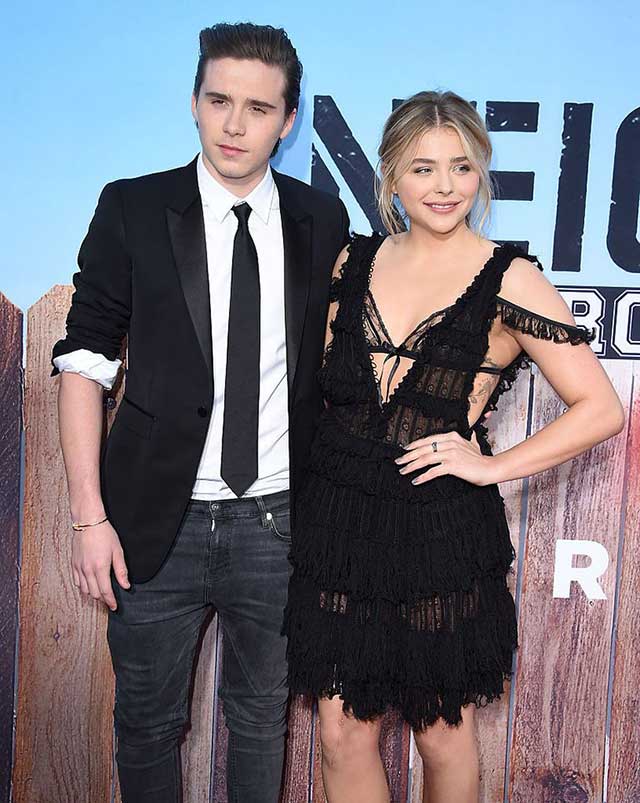 Chloë is interviewed by Elle.com and reveals the really sweet ways Brooklyn supports her when she's having a bad day.

"My boyfriend is a huge support," she shares. "I mean, don't get me wrong, I don't need a man for anything, but when I'm feeling bad about myself, he's like, "Stop. Look at what you say in interviews. Look at what you stand for. Listen to your own words, because you're as beautiful as you say you are! All young women are more beautiful than they think, you know. And I like you more in sweatpants than I do when you're on a red carpet." And it's nice to have a young man who's 17 years old be able to look at a woman that way. I think it means we're on the right track."

Amid all the relationship events with Brooklyn, Chloë also found herself embroiled in a feud with certain Kardashians. Briefly, it started when Chloë disagreed with one of Kim K's nude selfies, then after Kim published that now infamous audio of a phone call between her husband Kanye West and Taylor Swift discussing the song "Famous," Chloë made her thoughts known on Twitter and then Khloe got involved. with a pretty uncalled for, and incorrect, tweet.

At the same time, Brooklyn decides to post a photo of himself wearing West's Yeezy merchandise on Instagram. Probably not the best of timing, Brooklyn,

However, soon after accusations of shade are thrown around, Brooklyn deletes the photo and shares a snap of him and Chloë instead.

The couple attend the Teen Choice Awards and look adorable. 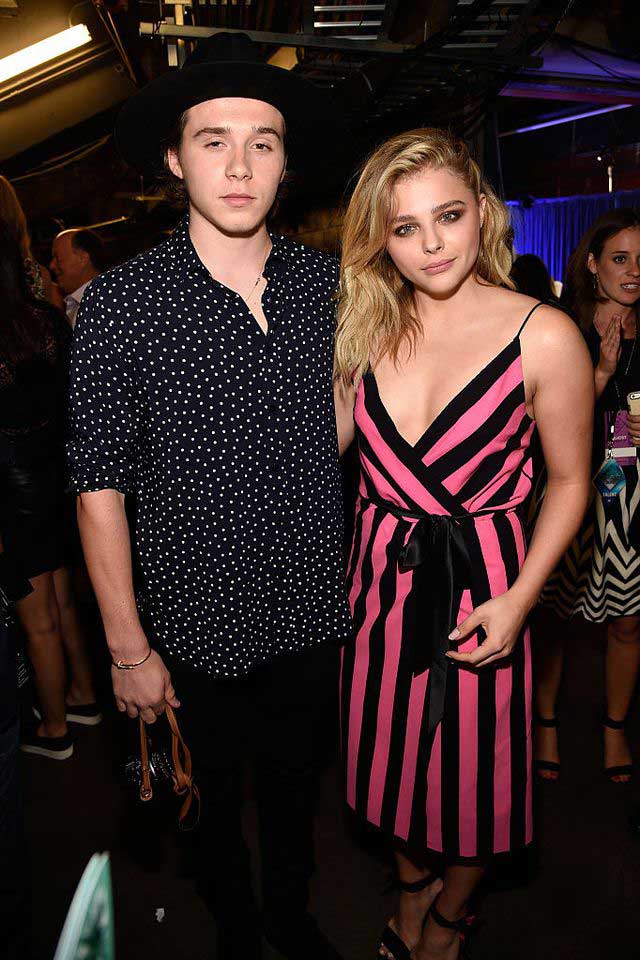 A month later and apparently it's all over. The New York Post says the couple ended their relationship a few weeks before.

In another case of unfortunate timing, Chloë's latest Teen Vogue cover is released where she talks about how difficult long-distance relationships can be as well as the pressures of being one half of a famous couple.

"We’ll go out and there will be 15 paparazzi and we're just going to a grocery store," she told the magazine. "We are real people and we're having real emotional experiences, and all this is happening around us. Trying to keep ourselves in our own little world is difficult."

Singer and reality TV personality Tallia Storm tells The Daily Mail Brooklyn "messed me about and then cut me off" when they allegedly dated in 2014. (Brooklyn reportedly later denies the couple ever dated.)

Rumors circulate that Brooklyn has truly moved on from Chloë by dating internet star Madison Beer. 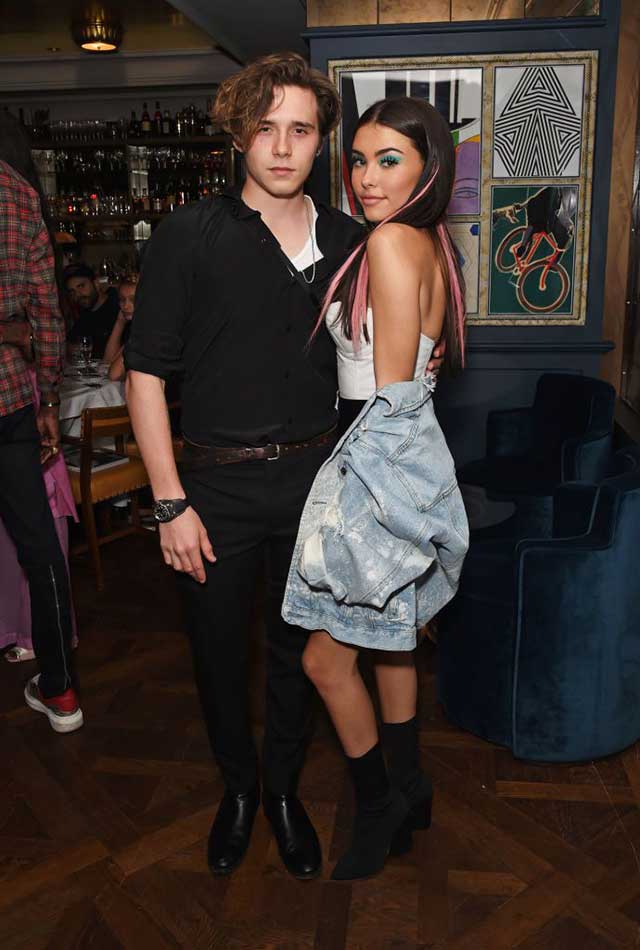 Madison denies the pair are dating but say they are friends who are "having fun right now."

“I've known Brooklyn for years, we've been really close and as we've gotten older—and I'm newly out of a relationship, we're definitely like crushing on each other," she said at an AOL event. "But we're both very busy. He's great, though. He's a cutie, literally one of my best friends... People are like 'Oh no, you guys are definitely dating. But he's moving to New York in two weeks—it's not really realistic... we're just having fun right now."

After the whole Madison situation appears to have died down and Brooklyn moves to New York to study photography, Brooklyn and Chloë hint they are back on when Brooklyn shares a photo of him with his hands on a girl's leg watching Game of Thrones. He captures it: "These nights are my favorite. Missing my girl," with a heart emoji, of course. Chloë responds with a heart emoji and a red wilting flower emoji too.

Brooklyn and Chloë watch a rugby match in Dublin and the actress posts a video of Brooklyn kissing her cheek on Instagram stories and all is good in the world.

Brooklyn shares a video of Chloë dancing in the aisles of Tesco proving they're just like any other couple who have a sudden urge for snacks and dancing.

The couple are pictured looking suave when they go for dinner in New York City: 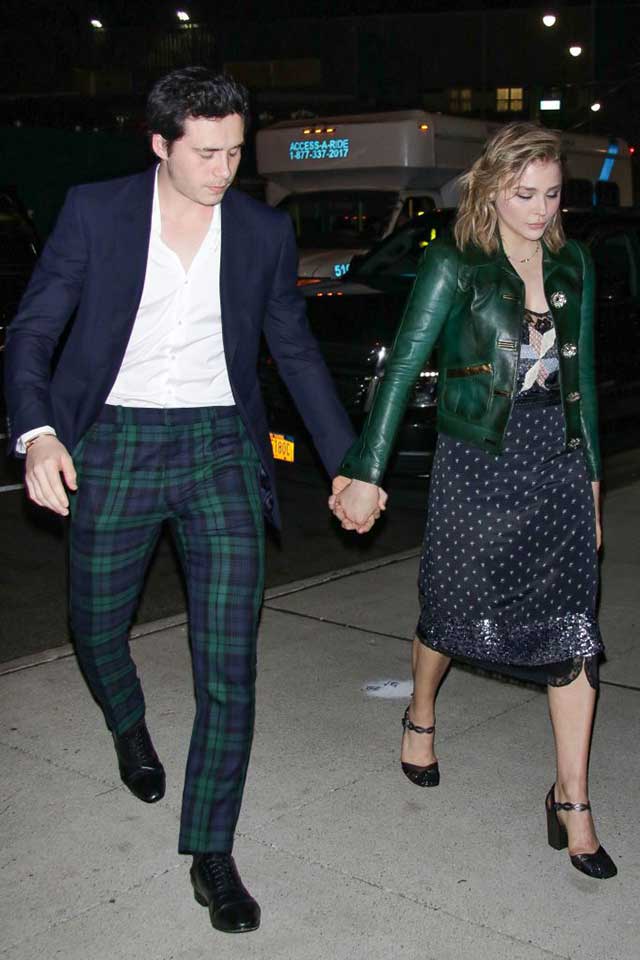 Chloë talks about the pitfalls of dating in the public eye when she touches on how it complicated her breakup with Brooklyn in 2016.

"I went through a hard year and I'm not going to hide that," she told Stellar. "I had to deal with this new level of fame while I was growing up, I was getting out of a relationship and all of it was very public. I wanted to hide."

The couple go matchy match with his and hers rings. Via Instagram, Brooklyn wears a "C" initial ring and Chloë wears a "B."

Brooklyn wishes Chloë a Happy Birthday, posting a gorgeous picture of her along with the caption: "Happy birthday baby, love you to the moon and back." Our hearts.

One month later and it's Brooklyn's 19th birthday. Chloë repays the favour by wishing her significant other a Happy Birthday too and telling him to "never stop smiling."

Brooklyn and Chloë are photographed saying goodbye to each other in New York City after the actress travelled there for Brooklyn's birthday.

Well, a lot can happen in a month. Just a few weeks after the couple were pictured looking so in love, Brooklyn is photographed kissing Playboy model Lexi Wood in NYC. I think we can take the assumption that Chloë and Brooklyn broke up, but when, why, where, and how?

It seemed like Chloë would be taking a dignified silence on this one. That is until she screenshots her playing Cardi B's new song "Be Careful" which is about someone cheating on the rapper and warning men to be careful with her.

Is this an insinuation Brooklyn cheated? What's going on?!

Day three into the drama and this time it seems like Brooklyn may have had his say. A Brooklyn fanpage shows the budding photographer as a child crying with his mother Victoria watching a football game. The captions reads: "Chloe's fans are attacking Brooklyn Beckham" and then Brooklyn appears to like the post.

Your guess is as good as ours, people.

This article originally appeared on Cosmopolitan.com/uk Minor edits have been made by the Cosmo.ph editors.