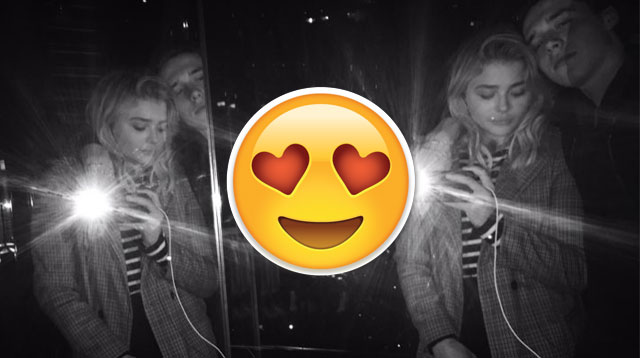 Chloe Grace Moretz and Brooklyn Beckham have sparked rumors that they have reunited after being spotted holding hands in London.

The 17-year-old son of David Beckham and Victoria Beckham was seen on a romantic stroll in the English capital with the 19-year-old Kick-Ass actress on Friday.

The couple were pictured trying to go incognito as they walked along Shaftesbury Avenue in the city, dressed in similar low-key outfits.

After the sighting, Brooklyn published a snap on his Instagram account with his arm over his lady love Chloe as she flashed the camera on a mirrored elevator.

Brooklyn recently split from 17-year-old Parisian model girlfriend Sonia Ben Ammar, with whom he was last seen at Disneyland, California, with a group of friends back in March.

Chloe and Brooklyn first got together back in the summer of 2014, and were spotted on several dates. However, they split in August, and unfollowed each other on social media.

Now, the two have apparently rekindled their romance and were even seen dining with the Beckhams and Chloe's mother Terri at Soho House in Los Angeles earlier this month.

A source told British newspaper The Sun that Victoria was making a "huge effort" with the young actress, and Brooklyn and Chloe sat with their heads affectionately on each others' shoulders during dinner.

It seems that the Carrie star has changed her mind about dating, as she previously revealed that she was reluctant to get into a relationship in the near future.

"I have no real plans. I don't want anything right now. I can't handle that right now," she explained. "I want to be with someone who's adventurous and wants to go do something. Don't take me to Nobu and get me nigiri. I'm OK. I can take myself to Nobu. I don't need someone to take me to Nobu."