Our Cosmo scoop has been confirmed by the TV host himself today at TV5's press party.
by Claire Betita-Samson | Dec 4, 2009
Post a Comment
Featured 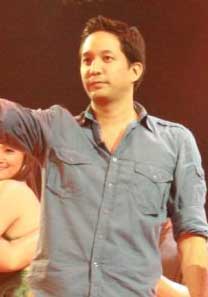 Paolo said that the offer was only made and forged very recently, and that last night marked his official move to TV5 from GMA-7, where he has been a talent for the past 14 years. He said he signed a three-year exclusive contract with the network.

Now powered by MediaQuest, owned by ABC Development Corporation Chairman, Smart and PLDT's Manny Pangilinan (MVP), TV5 promises to be even bigger and better in terms of content and reach, as not only will they be beefing up their pool of talents, programs, and infrastructure, they're also breaking new ground when it comes to technology. They will be the first network to produce shows in High-Definition, and which viewers can access wherever they go through different media: TV, online, and even through their mobile phones.

Incidentally, they will also be making more movies, doubling the number produced by the two giant networks combined, according to MVP.