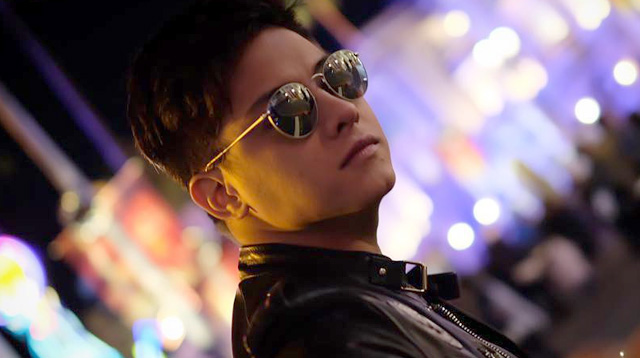 1 At the “Artists for Mar” event on Tuesday, May 3, Daniel Padilla, who has been campaigning for presidential candidate Mar Roxas, had quite a few things to say. The actor advised voters to think hard before they say or act on something. “Make sure na alam natin 'yung sinasabi natin. Huwag tayo masyadong matapang. Make sure na kaya natin i-back up 'yung sinasabi natin,” he said. Daniel then turned his attention to non-voters, particularly those who are very vocal about their opinions. “Di naman pwede tayo salita nang salita and hindi mo naman alam nangyayari sa eleksyon,” he began. “Marami kasi nagmamagaling sa eleksyon, hindi naman botante, so shut up ka na, hindi ka naman botante,” he said. Above all, he wants people to be open-minded and to remember, “Tao po tayo, hindi machine. May mga utak at puso tayo.”

2 Toni Gonzaga is one glowing mother-to-be! The 32-year-old host showed off her growing baby bump in this new image, captured while Toni was on set for a photo shoot. (ABS-CBN)

3 John Lloyd Cruz and Jennylyn Mercado's movie, Just The 3 Of Us, earned P16 million on its first day alone! Star Cinema promoter Mico del Rosario shared the announcement on his Instagram account, with the caption, “We are a certified mega blockbuster!” The movie made history as the first film to feature two leads from separate networks—Jennylyn is with GMA, while John Lloyd is signed to ABS-CBN. (PEP)

4 Is there a feud brewing between Demi Lovato and Nicki Minaj? At the Met Gala on Monday, May 2, Nicki was captured giving Demi the side-eye while the two posed for photos with designer Jeremy Scott. Demi decided to poke fun at the situation, sharing the snap on her Instagram and adding the caption, “This picture pretty much summed up my first and probably last met.” She later edited her message to include, “p.s. some of y'all need to learn how to take a joke.. I'm obviously laughing at the fact that 1. I look incredibly awkward and 2. That the shade being thrown in this picture actually gives me life.” So far, Nicki has not reacted about the picture. (Us Weekly)

5 Here’s one more reason to love Channing Tatum! The actor recently appeared on YouTube vlogger Carly Fleischmann’s channel to talk about his marriage and his career, among others. What is really touching about the clip is Channing’s sweet and gentlemanly demeanor toward Carly, who has autism and is unable to speak. Watch the entire interview below. (Cosmopolitan)