Dennis also asked Karen Davila to interview him for his side of the story.
by Leika Golez for Candymag.com | 5 days ago
Post a Comment
Featured

It's no secret that Julia Barretto has always had a complicated relationship with her dad Dennis Padilla. She mostly stays quiet about their estranged bond, but she finally broke her silence on their rift in an interview with Karen Davila last week.

"There's just so much pain since I was young," she revealed. "I just need more love. More protection. I just feel like [my dad] has to be my number one protector and that's not what I'm getting. It hurt. It's sad."

A few days after Julia opened up about this, Dennis took to Instagram to share his own thoughts on her statement. In a series of now-deleted comments, Dennis denied Julia's claims and asserted that she didn't really know the whole story behind their family's past.

Dennis also claimed that he has tried defending his family several times before, only for them to push him away in the end. "I defended you pero nagalit pa kayo sa akin...Sobra kayo," he wrote. "Humingi ako ng apology sa mga pagkukulang ko. Ano pa ang gusto nyo?" he added. 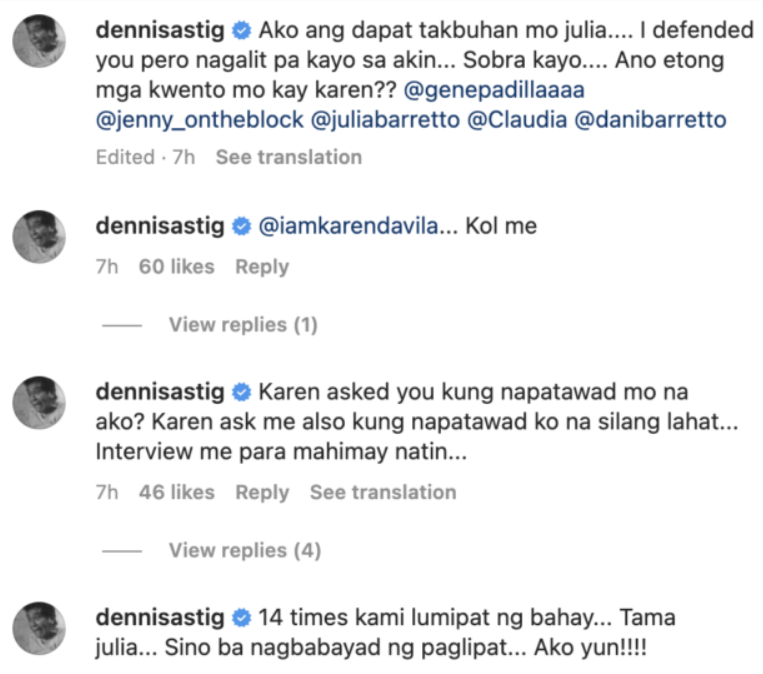 Insisting that Julia's story isn't completely accurate, he asked Karen to set an interview with him too in the spirit of journalistic fairness.

As of press time, neither Julia nor her other siblings have responded to these cryptic comments.

ICYDK, Dennis also called out his children in June for not greeting him on Father's Day. Julia's younger brother Leon consequently penned an emotional letter asking his father to "stop resorting to public shaming."

Dennis Padilla Posts About *Not* Receiving A Father’s Day Greeting From Julia, Claudia, And Leon Barretto