Only someone with seriously impaired vision—or someone just looking to get a rise out of people online—would dare call Selena Gomez ugly. But that’s just what Dolce & Gabbana designer Stefano Gabbana did on Instagram, and he’s invoked the wrath of Selenators everywhere.

"È proprio brutta!” he commented, which roughly translates from Italian to “she’s really ugly!” He also responded to a commenter who said she “looks like a Pomeranian dog,” replying, “hahahahahaha is true hahahaha.” 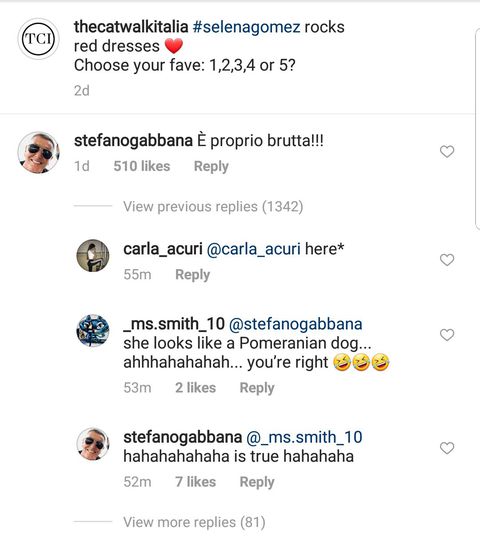 As PopCrave notes, Gabbana has a history of making rude comments on celebrities’ Instagram accounts; he’s also feuded with Miley Cyrus and her brother, Braison. People adds he’s also recently made a nasty comment about Kate Moss, plus made controversial arguments against in vitro fertilization and gay parenting. He’s also fought back against critics over his label's dressing Melania Trump, and Dolce & Gabbana even designed #BoycottDolceGabbana shirts in response.

But this time, Gabbana has pissed off Selena Gomez fans, and that may have been a bridge too far. Her fans have trashed him on Instagram and Twitter.

Dolce & Gabbana has not issued a response to the backlash, and neither has Gabbana himself. But given his history of trolling on Instagram, it’s unlikely Gabbana will stop now. In fact, here's the gross thing he posted in response to Internet critics last year.