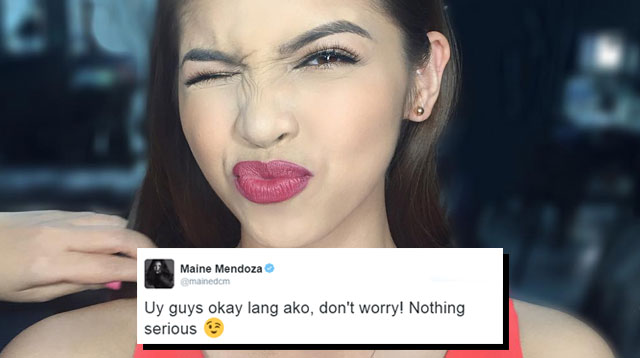 1 While filming for Eat Bulaga! on March 8, Maine Mendoza abruptly left the set for the hospital. According to a post on the television show’s Facebook account, the actress had been experiencing pain on the side of her body, thus her sudden departure. But Maine was quick to assure her fans that she was completely fine, posting a selfie on Twitter with the caption, "Uy guys okay lang ako, don't worry! Nothing serious." Good to know, Maine! (PEP)

2 Kris Aquino has announced that she will be leaving ABS-CBN this month—her last day with the network is on March 23. The TV personality posted on Instagram a detailed explanation of her decision, which you can watch below:

3 Who else is looking forward to Season 6 of Game of Thrones? To get us even more excited for the season premiere on April 24, HBO released a trailer that's certainly going to keep you on the edge of your seat! Check it out here:

4 Kim Kardashian once more broke the Internet after she posted this nude selfie on her Instagram account:

Naturally, the haters came out in full force, so Kim took to her website to address the backlash she has since received. "I am empowered by my sexuality. I am empowered by feeling comfortable in my skin. I am empowered by showing the world my flaws and not being afraid of what anyone is going to say about me. And I hope that through this platform I have been given, I can encourage the same empowerment for girls and women all over the world,” she said. "It's 2016. The body-shaming and slut-shaming—it's like, enough is enough. I will not live my life dictated by the issues you have with my sexuality. You be you and let me be me.” Brava, Kim! (Cosmopolitan)

5 Cebu Pacific turns 20 this March! To celebrate, the airline has brought back its popular P1 seat sale promo to 34 domestic (including Boracay, Cebu, and Puerto Princesa) and international (Dubai, Tokyo, Shanghai, and more) destinations. Book your flight until March 10 for travel dates from July 1, 2016 to March 31, 2017. Seats are bound to run out soon, so book quickly!

Cebu Pacific has also released this aaw-inducing video to mark this milestone in its history: