Descendants of the Sun actor David Lee McInnis was in Manila last week to sign with talent managers JoAnn Bañaga and Arnold Vegafria of ALV Talent Circuit for a one-year management contract.

"I feel very fortunate to be able to make a transition to another market," he told reporters in a press conference during the contract signing last Friday. "Just going to Korea was a big deal for me and now coming here, let's see what happens… I'm super excited."

Vegafria will be managing his projects in the Philippines while HB Entertainment handles his career in Korea.

David hopes to watch Filipino dramas to "get a flow and get to feel of how it works over here." On his list of to-watch films is the critically-acclaimed historical film Heneral Luna.

When asked about his DOTS co-stars Song Joong Ki and Song Hye Kyo, David revealed that he had no idea the two stars were dating while they were still doing the show together. 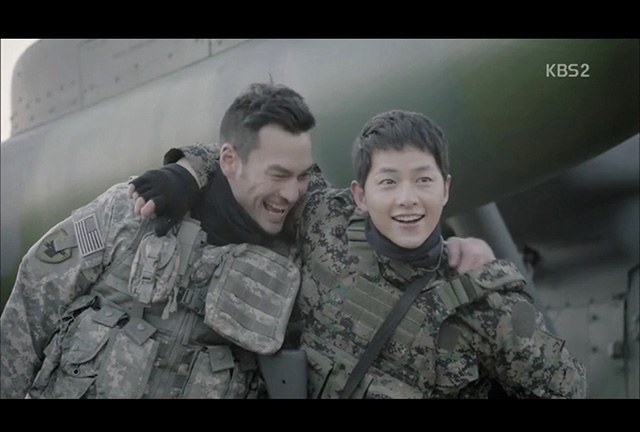 "They kept it very hush-hush, even on set. No, nothing. Not even one percent."

Although he played Song Joong Ki's nemesis Captain Argus in DOTS, the 43-year-old German actor and Joong Ki are friends in real life and have kept in touch after the show ended. The two even caught up and had drinks a few weeks ago.

"Actually, I got invited," he said, talking about Song Joong Ki and Song Hye Kyo upcoming wedding on October 31. He has yet to receive the formal invitation, but Joong Ki told him that "he'd want me to be there."

While in the country, David was able to sample local cuisine, go shopping, and meet actresses Gelli and Janice de Belen—both K-drama fanatics.

Janice, who was totally having a fangirl moment, posted a photo with David and the group on her Instagram, saying "AN ENJOYABLE DINNER WITH NEW FRIENDS! IT WAS NICE MEETING YOU @davidleemcinnis! COME BACK SOON."