Everything To Know About Elsa Pataky, Chris Hemsworth's Wife

For starters, her boyfriend once gave her a castle.
by Mehera Bonner | Apr 30, 2018
Post a Comment
Featured

Bad news: Chris Hemsworth is married which means he will never love you. Good news: His wife model/actress/producer Elsa Pataky is extremely cool so you don't need to be too bitter about it.

You probably know 41-year-old Elsa from the Fast and the Furious franchise, not to mention Snakes on a Plane, but there's so much more to learn.

She's from Spain and fights with Chris in Spanish to annoy him.

Elsa was born in Madrid to a biochemist dad and a publicist mom, and has been in a ton of Spanish movies and TV shows. Naturally, she's fluent in Spanish (and English, Romanian, Italian, Portuguese, and French!), and argues with Chris in her native language to troll him.

"When I hear the Spanish directed at me, it's usually unfortunate, controversial, aggressive situations," he told Ellen. "So I'm just thinking, 'What is she saying right now?' and 'What’s my comeback to this?' When we're fighting, basically, which is never! If she gets angry enough she'll drop the English façade."

Again, she has a solid film and modeling career.

Elsa's appeared in tons of Spanish productions, not to mention some majorly mainstream international movies. Let's all sit back and enjoy the trailer for Fast and Furious 7, shall we?

She secretly kissed Chris in Thor.

Elsa stood in for Natalie Portman during the final kissing scene in Thor thanks to a scheduling conflict. Natalie's actually the one who broke the news, telling NY Daily News, "He was working in Hong Kong and I couldn't get there because I was working on my own film. So they put his wife in my wig and costume, that's why it was so passionate."

Watch the kiss below!

She used to date Adrien Brody and he casually bought her a castle.

Elsa dated actor Adrien Brody back in 2006, and he went ahead and bought her a 19th century mini castle (fine, it's technically an "estate") for her 31st birthday. "When I saw the castle, I asked Adrien, 'Is this ours?' she told Hello! in a cover interview. "He said, "Yes—welcome home."

Side-note: The couple were extremely into wearing hats during their time together: 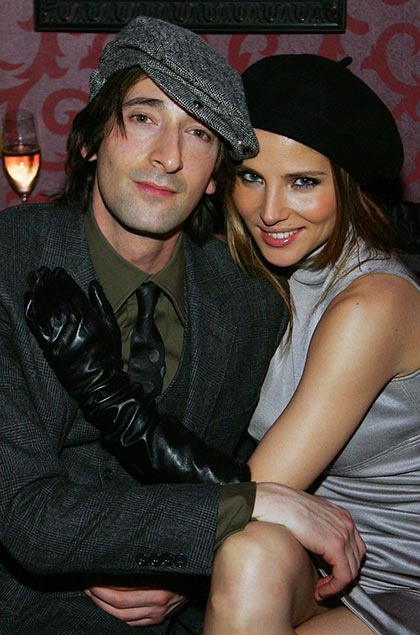 She's in a new Netflix show. ABOUT MERMAIDS!

Elsa is starring on Netflix's very first Australian series Tidelands, and the reason she didn't hit up the Avengers premiere with Chris is because production just started in Queensland. Also, this show is a supernatural crime drama that appears to be about MERMAIDS, so consider us invested.

She and Chris Hemsworth got married three months after meeting.

In other words, Chris swept Elsa off her feet. The pair were introduced by talent agent William Ward in 2010, and got married three months later in Australia during Christmas. Now they have three kids named Tristan, Sasha, and India!

"There was no light bulb moment. From the first time we met, we just made sense," Chris told Elle. "She's fun. She's outgoing, and she has a sense of humor and a passionate attitude toward life, which is nice to try to keep up with."

She fell in love with Chris' voice first (Didn't we all?).

"His voice is Amazing! Before I met him, I heard his voice on the phone and that was what I loved. He was probably making it even deeper," she said in 2016. "He also has an amazing body, which I think is sexy."

Chris's career has put a major strain on their relationship.

Not everything is sunshine and rainbows in Chris and Elsa's relationship, and like any couple, they've had ups and downs. "My wife and I fell in love, had kids, didn't really see each other for a few years, then fell back in love." Chris told GQ in 2017. "In terms of work, [Elsa has] certainly given up more than I have. She'd like me to step back and be at home with the kids more, and of course, I want that too. But I feel like I'm at this crucial point in my career—I've just got to set up for longevity or I'll slip off."

Meanwhile, Elsa told Elle, "I think any time you start a family without knowing each other that much, it can be complicated...He was very young to be starting a family, and at the same time he was juggling that with his career and it was sometimes difficult, there was so much going on. But he was always trying to be the best dad and has never failed to make me feel like his family is the most important thing to him and [going through that] is how we've become so strong together."

She had a nude photo published without consent.

A photo of Pataky topless appeared on the cover Spain's Interviu magazine in March 2007, and you better believe she sued. The image was taken by paparazzi as Elsa was changing for a beach shoot in Mexico, and a Spanish court ordered the mag to pay £250,000 (P17,881,367.89) for printing it sans consent.

She's super into fitness—and has the same trainer as Chris!

In fact, she's way more fit than her husband—and he's willing to admit it. "Yeah, she has a greater cardio skill set, endurance than I'll ever have, and it's a little embarrassing at times," he told ET. "We have the same trainer, a mate of mine from school that we grew up with, and he very often says, 'You know what, your wife is much fitter than you are,' so I'm well aware of it."