'I didn't know I had generalized anxiety disorder or a version of panic disorder.'
by Shannon Barbour | Oct 4, 2018
Post a Comment

To raise awareness for the mental health of children, actress Emma Stone spoke to the president of the Child Mind Institute, Dr. Harold Koplewicz, about her struggles with anxiety and panic attacks and how acting saved her life.

While speaking with Dr. Koplewicz, Emma said she had her first panic attack in the second grade and always struggled with it growing up. "It was really, really terrifying and overwhelming," she said. "I was at a friend's house, and all of a sudden I was convinced the house was on fire and it was burning down. I was just sitting in her bedroom and obviously the house wasn't on fire, but there was nothing in me that didn't think we were going to die." 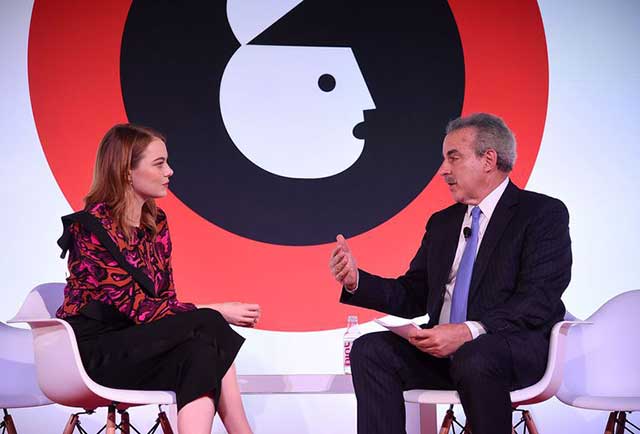 She shared that her anxiety and panic attacks made it so she didn't want to go to school and couldn't hang out at her friends' houses.

Once her family noticed a pattern, Emma started going to therapy, which she called "embarrassing or shameful" because it wasn't normal to talk about mental health or therapy at the time. While Emma was in therapy, she said she didn't actually know she had a disorder because her mom didn't tell her. She explained:

"They gave her a name for what I was experiencing but she didn't tell me, which I'm also grateful for. I didn't know I had generalized anxiety disorder or a version of panic disorder. I'm very grateful I didn't know that I had a disorder so to speak...there weren't a lot of people that I could look at. I wanted to be an actor and there weren't a lot of actors that spoke about having panic attacks."

Emma continues to cope with her anxiety and panic attacks, and acting is a big part of how she works toward her goals. "If I didn't go to LA, I would die," she said. Her struggles have also helped her become a better actress because she's able to relate to different characters. "There is a tendency to want to understand how people around you work or what's going on internally with them which is great for characters," she said.

But Emma said acting isn't the only thing that can help other people overcome their own struggles. She said, "You just have to find that thing within you that you are drawn to."