Fun, fearless Gretchen Espina pursues her dream and realizes it in Shining Through.
by Dinno Erece | Aug 22, 2009
Post a Comment
Featured 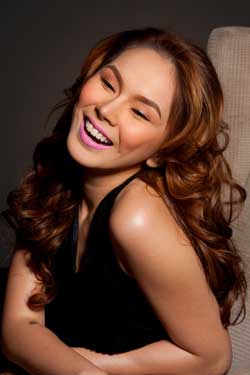 Exactly one year and a day after the pride of Biliran was proclaimed the first and only Pinoy Idol on GMA-7, Gretchen Espina’s dream of having an album of her own is finally realized, thanks to Sony Music.

The 20-year-old graduating student of UP, where she’s taking up International Languages, was given a press conference with a lounge-act theme to launch Shining Through.

And shine she did throughout the 13-cut album, where she showcases a more mature voice since we last heard her sing. Credit goes to her extensive voice coaching while waiting for the album to materialize.

Shining Through will feature the original Filipino composition "Kasalanan Nga Ba?" as its carrier single. Incidentally, the MTV shown during the album launch is directed by Paul Soriano, also known in the biz as Toni Gonzaga’s man.