First Trailer Of 'Chilling Adventures Of Sabrina' Is Finally Here

Netflix has finally unveiled the first official trailer for  Chilling Adventures of Sabrina, a new series brought to you by  Riverdale show runner Roberto Aguirre-Sacasa. Kiernan Shipka plays Sabrina Spellman, who in this 45-second preview appears to be celebrating her 16th birthday. The guests are... interesting.

Outside of the birthday celebration and creepy singing, the trailer also includes a look at Sabrina's high school (the mortal one), her boyfriend Harvey (played by Ross Lynch), a kiss (!) between Sabrina and Harvey, and the Weird Sisters (led by Tati Gabrielle as Prudence) doing something scary in a forest (and then a cave). But back to the birthday—can anyone tell me who the horned creature sitting directly across from Sabrina is? And more importantly, what kind of cake is everyone having? 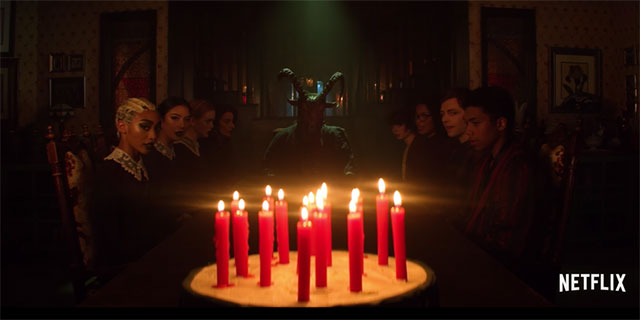