We chatted with the Grammy nominee on his recent Manila visit. Learn what song he dedicates to Cosmo girls!
by Cheekie Albay | Oct 30, 2009
Post a Comment
Featured 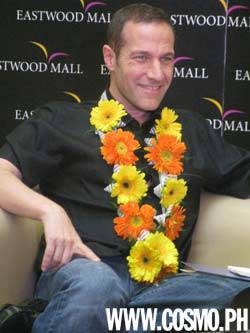 Sure, we know him as the guy who tinkers with the piano keys on classic senti love songs “Valentine” and “The Gift.” But did you know that this songwriter and piano-playing prodigy is so in-demand in the US, he has scored a platinum record and three gold records, earned a Grammy nomination, and performed for no less than former US President Bill Clinton at the White House?


Jim Brickman brings his world-class talent to the Philippines once again with the “Beautiful World” concert tour, held to promote his latest album of the same name. The tour would have him visiting 75 cities from fall of 2009 to spring of 2010. His Manila pitstop took place last Wednesday, October 28, at Eastwood City, Libis.

The Grammy nominee’s list of musical collaborations reads like a who’s who of the adult contemporary scene—he has worked with Jon Secada, Michael Bolton, and Martina McBride, to name a few. But Jim unabashedly proclaims his admiration of Filipino singers, saying in an interview on Spot.ph, “Everyone in the Philippines can sing.”

“I think it’s something in the water [here]. Everybody has a talent,” Jim quips.

True enough, he is proud to claim that he has worked with Sharon Cuneta, Martin Nievera, Lea Salonga, Ariel Rivera, Erik Santos, and most recently local hottie Christian Bautista, who lends his vocals to the song “Never Far Away” in Beautiful World.

“I just wanna make sure that my songs have made it to the karaoke versions of some of the parties here. I’d feel bad if they didn’t,” Jim says.

We thought of asking Jim what song he would love to dedicate to Cosmo readers, and he gamely answered, “Probably ‘The Gift’ because [it’s] a song about the gifts that we give each other that are not material things, that are not expensive jewelry or stuff like that. It’s about a couple [that’s] thanking each other for the gift of loving each other.”

So why don’t you pop that old Jim Brickman CD and listen to “The Gift” with your honey, just for old times’ sake?