1 Will Heart Evangelista be wearing Monique Lhuillier for her wedding with Sen. Chiz Escudero? The actress uploaded an Instagram snapshot of her browsing wedding dresses at the designer’s store in Los Angeles. She captioned another photo, “#day89 #144daystoahappyHEART @moniquelhuillier fitting #chizheart21515.”

2 There’s going to be an increase in the MRT and LRT fare by January 4, 2015, according to the Department of Transportation and Communications. "It's a tough decision, but it had to be made. It's been several years since an increase was proposed. We delayed its implementation one last time until after the Christmas season. While 2015 will see increased fares, it will also see marked improvements in our LRT and MRT services," said DOTC Secretary Jun Abaya. (ABS-CBN News)

3 Kris Aquino was rushed to the hospital on Thursday, December 18, after she started throwing up at home. She returned to work on The Buzz on Sunday, December 21, and assured everyone that she was feeling better. “Hindi talaga kinaya na, nung Thursday bumigay ang katawan ko. I was really hilong-hilo and parang puputok na 'yung ulo sa sakit and when I got home, I kept throwing up. Super taas ng blood pressure ko, 150/110 at its peak 'yung BP ko. So sabi nila pumunta na kami sa ospital. Baka naman daw na-stroke na ako or whatever,” she said. (ABS- CBN News) 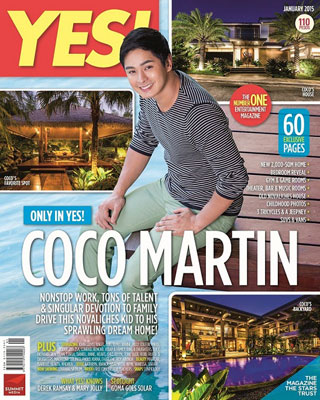 4 Have you seen Coco Martin’s house in the January 2015 issue of YES! magazine? The actor opened up his 2,000-square-meter home in Fairview, which took three years to build. Coco didn't want to be stressed about paying off house debt, so he accepted ALL the projects offered to him so that he could fund the construction debt-free. (Click here for your subscription options!)