An Honest Review Of 'Aquaman'

It's alternately funny and angsty, sweet and sarcastic, and rompy and romantic. 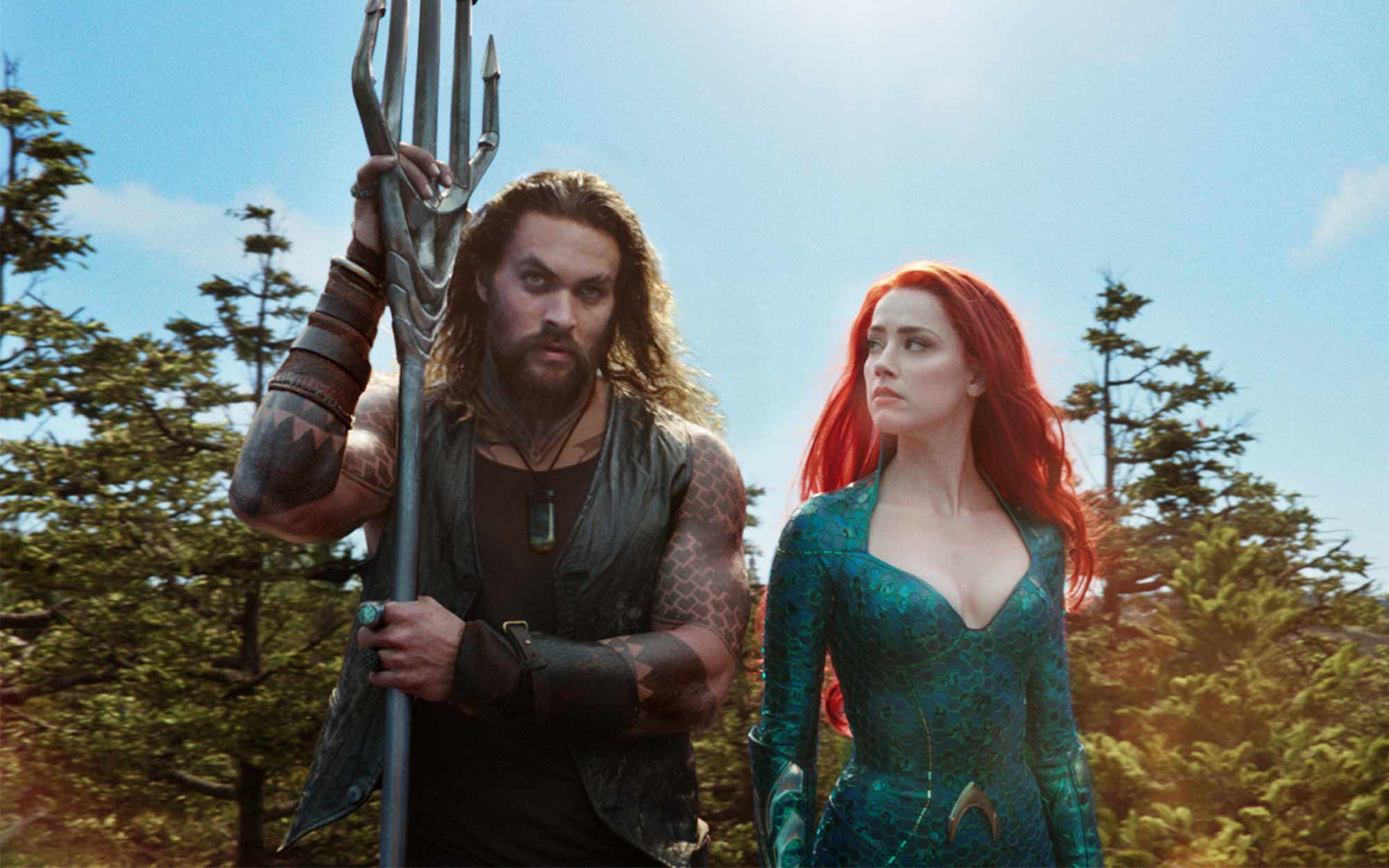 The fate of two worlds lies with one hero.

Half-Atlantean, half-human Arthur Curry (Jason Momoa) has always lived with a foot in both the undersea and surface worlds while never really fitting in with either. He has gained some fame as the Aquaman after defeating an alien threat with the help of other heroes of the surface world (as seen in 2017's Justice League) but prefers a carefree approach to life and heroism.

With the threat of war between Atlantis and the surface dwellers, warrior and Atlantean princess Mera (Amber Heard) tells him he's the only one who has any hope of bridging both worlds. To do it, he must claim a heritage he has been conflicted with ever since his mother was forced to abandon him and his father to save their lives. Not only that, but he must embark on a quest that is the stuff of legends and fairy tales and, in the process, discover if he is worthy of being not just a king, but the hero both his people need.

This is an adventure story of love, families, and self-determination set against a backdrop of ecoterrorism and genocide prettied up by the presence of fantastic undersea creatures and so, so much bioluminescence.

A man born of two worlds (land and sea) must find a way to embrace them both—and save the planet in the meantime. He is alternately challenged and aided by a princess who schools him in the ways of power, politics, and protecting your people while kicking butt, taking names, and looking absolutely gorgeous while doing it.

Joseph Jason Namakaeha Momoa first lit up the small screen with recurring roles in Baywatch, North Shore, and Stargate: Atlantis. But for many, it's his role as Khal Drogo in the first season of HBO's Game Of Thrones that made him a household name. More recently, he debuted Aquaman in 2017's Justice League (whose events occur immediately before the events of this movie, in case you're curious about timelines) and played fur trader Declan Harp in Canadian historical drama Frontier.

Identified as the world's most beautiful woman via face mapping techniques using the ancient Greek golden ratio, Amber Heard's breakout roles include those of Angie in Pineapple Express and Greta Matthews in CW's Hidden Palms. She also played Baja Miller in Never Back Down and Zoe in Magic Mike XXL.

Oscar nominee Willem Dafoe brings his unique brand of gravitas and intensity to his characterization of Vulko, the Atlantean royal vizier. Apart from the role in The Florida Project, which earned him a nod from the Academy, he has played Gerhard Hardman in Murder On The Orient Express, Peter van Houten in The Fault In Our Stars, and Norman Osborn, the villainous Green Goblin in Spider-Man.

Like Defoe, Patrick Wilson comes to Aquaman with previous experience in turning a comic book character into a live-action role; he played Dan Dreiberg, or Nite Owl, in Watchmen. Fans of the horror genre, however, will more easily recognize him as Ed Warren from the Conjuring franchise and as Josh Lambert from the Insidious series.

Oscar winner Nicole Kidman is luminous as the fierce warrior and loving wife and mother, Atlanna. She won an Academy Award for her portrayal of Virginia Woolf in The Hours, but you may also recognize her as Satine in Moulin Rouge!, Gillian Owens in Practical Magic, Isabel Bigelow (Samantha) in Bewitched, and Dr. Chase Meridian in Batman Forever. Recently she has been a series regular in the show Big Little Lies.

1. This is the first movie to bring the character of Aquaman to a live-action, big-screen medium. Aquaman has been represented in several animated and animated theatrical films, notably Justice League: Throne Of Atlantis, as well as on the small screen, with shows like Justice League, Justice League Unlimited, and Smallville, among others.

2. Although it is a fictional underwater kingdom for the purposes of this movie, Atlantis dates back to Greek mythology and is mentioned allegorically by ancient philosopher Plato to warn against a nation or culture becoming too proud or overconfident in their superiority. According to legend, the hubris of the people of Atlantis caused the city to lose favor with the gods, who punished the nation by sinking it into the Atlantic Ocean. Hypotheses about Atlantis' location continue to abound, and it is perhaps the most famous lost continent.

3. One defining trait of Arthur Curry, or Aquaman, is that he is a child of two worlds—something actor Jason Momoa and director James Wan can well identify with. "Jason is a Hawaiian who grew up in middle America. He never quite felt like he fit into either world. And that's something I understand as well, as an Asian guy born in Malaysia who grew up in Australia. Having such a strong Australian upbringing, I've retained my Chinese/Malaysian heritage as well," Wan has said.

4. Nicole Kidman, who plays Arthur's mother, Atlanna, turned down the role of Queen Hippolyta in 2017's Wonder Woman due to a scheduling conflict but jumped at the role of the Atlantean queen when director James Wan offered it to her. She told the Daily Mail, "As soon as he said I could wear mother-of-pearl and be a mermaid warrior, I said, 'I'm done. Please. If there is one thing I have to do in my life, I have to be that.' Because you've got to have some fun."

6. Aquaman's undersea origins have resonated strongly with Momoa, himself a marine biology graduate. "Like Arthur, I was a half-breed, split between Iowa and Hawaii, so I could definitely identify with that. And from the Philippines to Hawaii to Tahiti and Fiji… Many islands have their celebrated water gods. That resonated with me instantly," Momoa has said.

7. The comic book and animated versions of Aquaman show the character as a blonde. Momoa added blond highlights to his hair as a nod to the original version.

DC Comics fans, let your heart be light this December because Aquaman delivers on all the promises it made in the trailers leading up to its release. I've decided to think of this movie as a gift from Warner Bros. Pictures to DC Extended Universe (DCEU) fans.

These trailers promised heaps of action and beautiful set and costume designs. We got fast-paced, complex fight scenes that made the most of the possibilities offered by underwater combat by superpowered beings.

The majority of the costumes were vibrant yet, true to DCEU trend, practical for warriors. However, if you have never wanted to wear a jellyfish before, I guarantee that one look at Mera dressed to the nines as befits Atlantean royalty will leave you positively covetous. As for the sets, these were 50 percent the best of something out of National Geographic, 50 percent soaring fantasy, and 100 percent breathtaking.

The trailers promised spectacle and went over and above to deliver this. What I didn't expect going into the theater was the firework show of feels I would get while watching Aquaman. Because the backdrop of magical kingdoms and catastrophic wars served to frame a story that, at its heart is about love, family, identity, advocacy, and responsibility.

Toss in a healthy dose of banter between our two heroes, add enough campiness and melodrama to give a nod to the Aquaman you might have known before Momoa brought his tats and muscles to the character, and what you get is a movie that is full of contradictions yet surprisingly cohesive. All in all, it's alternately funny and angsty, sweet and sarcastic, and rompy and romantic.

As the titular character, Momoa is equal parts goofball, hotheaded brawler, and self-doubting son who needs to tap into his full potential. With him, every step of the way is Heard's Mera, a strong, passionate woman with a core of integrity and the will to fight for the greater good, no matter what it costs.

With the addition of a cast of supporting characters with complex backgrounds and motivations, the movie is surprisingly nuanced, even tackling global issues like cultural diversity, the environment, and political strong-arming without coming off as soap-boxy.

My verdict? The story takes the feels and ideals of Don Quixote, Indiana Jones, The Little Mermaid, and every Hallmark movie ever made and sets it in a framework that takes the best of magic and effects from Legend Of Korra, Pacific Rim, Neverending Story, and the Insidious series, smooshes everything together and comes out with a fun, brilliant gem that is joyful and extravagant and just plain fun. My nerd heart is happy and eager to see this again in IMAX 3D. Maybe a few times.

As a final note, I'll say, go see the movie in the best theater you can access! It's well worth it. And for those with plans to watch it already: There are no end credits to wait for.