An Honest Review Of 'Busted!'

When you've had enough of K-dramas and rom-coms, this show is perfect for you. 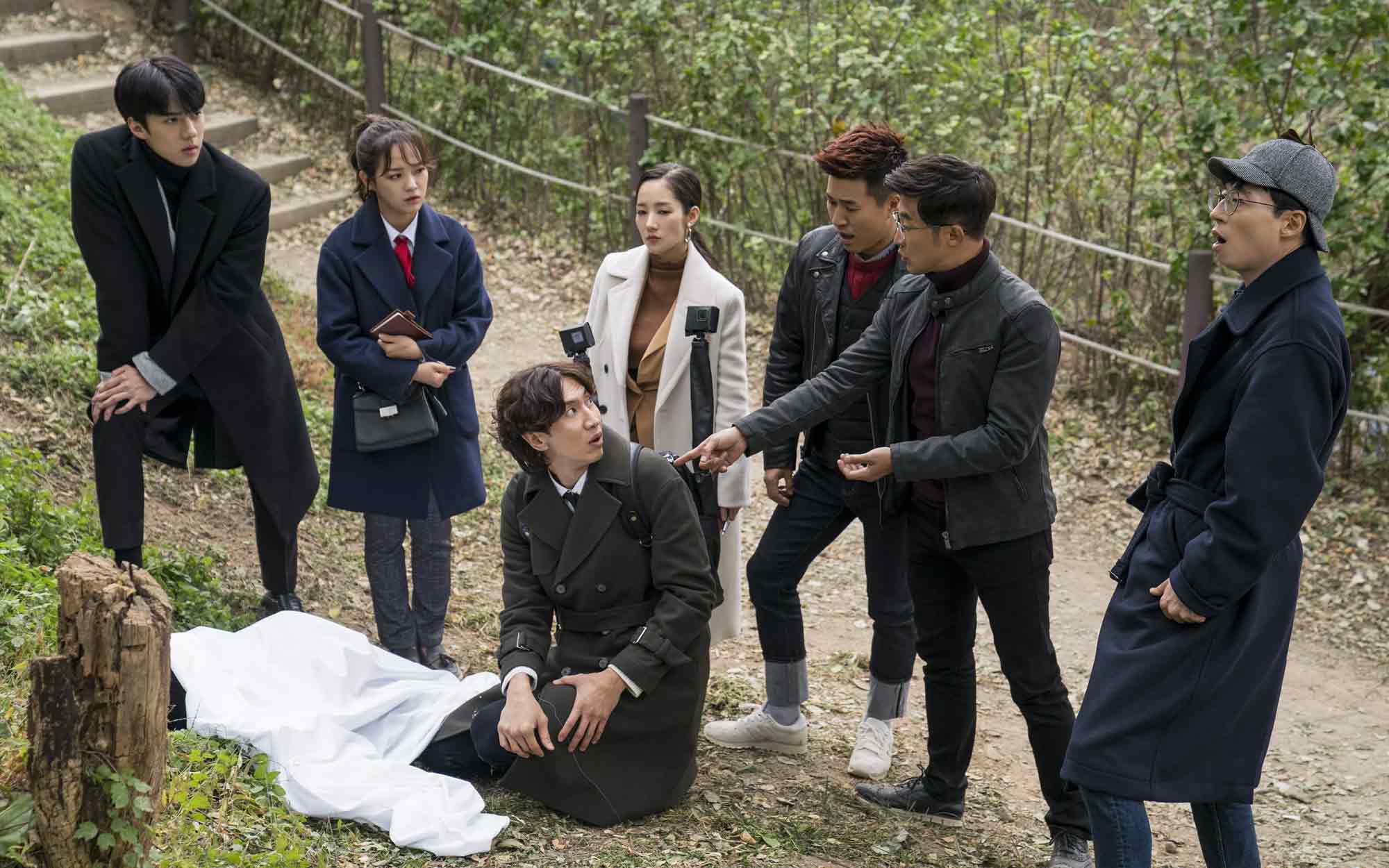 It's a mystery game with Korean stars guessing who killed who!

Busted! is a mystery variety show with seven celebrities as the main cast. These stars act as "detectives." In an operation called "Project D," each of them was implanted with a microchip containing the DNA of the best detectives the world. However, the technology has a glitch which causes memory loss and other malfunctions.

The show starts with the cast gathered by a man named "M" for a murder mystery party. M ends up being murdered, and the detectives try to trace the culprit by gathering clues and following their leads. In the next episodes, another man named "K" gives them various other missions. They face different challenges that supposedly leads to unveiling the mystery behind Project D.

The (mostly scripted) show features seven celebrity detectives who receive missions from a mysterious leader. They fulfill tasks (without much questions for the leader LOL) and with a lot of wit and humor!

Jae Suk has appeared in various Korean variety shows, such as Infinite Challenge (2005), which ended in March 2018. He's currently a regular cast member of one of the internationally famous K-variety shows, Running Man (2010 to present).

Jae Wook has been in different movies, series, and even musicals in Korea. Before Busted!, he most recently appeared in the drama, Five Enough (2016), and the variety show, Pot Stand (2017).

Jong Min has appeared in many K-variety shows before, including some episodes of the 2018 season of Law of the Jungle (the ones in Pantagonia). He's also part of a K-pop group called Koyote. He's currently a regular cast member of another popular and long-running K-variety show, 2 Days & 1 Night (2007 to present).

Kwang Soo has been in a handful of movies and series, including his most recent drama, Live (2018), and the upcoming film, The Accidental Detective 2 (2018). Together with Jae Suk, he's a regular cast member of Running Man (2010).

Min Young has played the heroine in several dramas already, including Queen for Seven Days (2017). She is *the* Secretary Kim starring opposite Park Seo Joon in What's Wrong With Secretary Kim (2018).

Sehun had a handful of cameos and web series roles before, but it's his first time being a regular cast member for an entire show. The handsome K-pop star was recently in Manila for EXO Planet #4: The ElyXiOn in Manila. He made headlines, too, when he was dubbed Best-Dressed by Vogue at a Louis Vuitton fashion show.

Sejeong has also guest-starred in various K-variety shows before as part of promoting her K-pop group and her solo career. Most recently, she played the lead in the drama School 2017 (2017).

"Busted!'s production is amazing! You should see how well-thought-out the plots and setups are. If you're a fan of mystery and Korean variety, this is the perfect show for you! Mapapaisip ka talaga—it's like you're doing detective work, too. Nakakainggit pa nga minsan naiisip mo sana nandoon ka sa crime scene!"—Shayne S. Carlos

"I actually watched Busted! because I am a huge fan of Yoo Jae Suk and Lee Kwang Soo. After the first episode, the show excited me, and I was hooked. It was not just a simple problem solving [mystery show]. It also has its charms like the plot twists that keep you on the edge of your seat. The fun interaction between the actors will make your stomach ache from laughing, too! I can't wait to see what they have prepared for season two!!!"— Charisse Quijano

I also watched Busted! since I'm a huge fan of Running Man and its members Jae Suk and Kwang Soo. I was expecting the show to be as amusing as the previous episodes of RM where the cast was tasked to solve mysteries. I was able to see Jong Min in the few episodes of 2D1N that I watched, and I was curious how he acts with the other stars.

If you're a fan of K-variety shows, you'll notice that the Netflix Original is a tiny bit similar to RM's older themes—except there's more blood in Busted! Jae Suk, Kwang Soo, and Jong Min are less candid here, too, since it's scripted. But don't worry, the comical reactions of the variety show veterans are still intact (and still so, so funny!)

What I enjoyed about the show aside from the three members I knew before was the realistic reactions of the cast when they're surprised by certain props or plot twists. There's always a point in the show where the cast display slapstick humor, and I couldn't help by LOL at them. (P.S. let me be biased and say, Lee Kwang Soo is so underrated as an actor and a comedian—he needs more exposure in K-dramas STAT!)

As a fan of thrillers, I was impressed by the cases they ventured to solve, too. You know the mini-stories were scripted, but the way the cast uncovered clues and used their wit seemed natural. The brave Min Young, the cheerful Sejeong, and the clever Jae Suk seemed to be the sharp aces among the band of detectives, but the others helped in their own ways.

A lot of K-variety show fans were confused or disappointed by the format. For me, if you're going to watch the show, you can't limit yourself to the formats you're used to. If you tune in and immerse yourself in the plot, you might really get hooked. And hey, if you didn't like season one, there's always season two to give it another shot!

Catch the complete episodes of Busted! on Netflix!