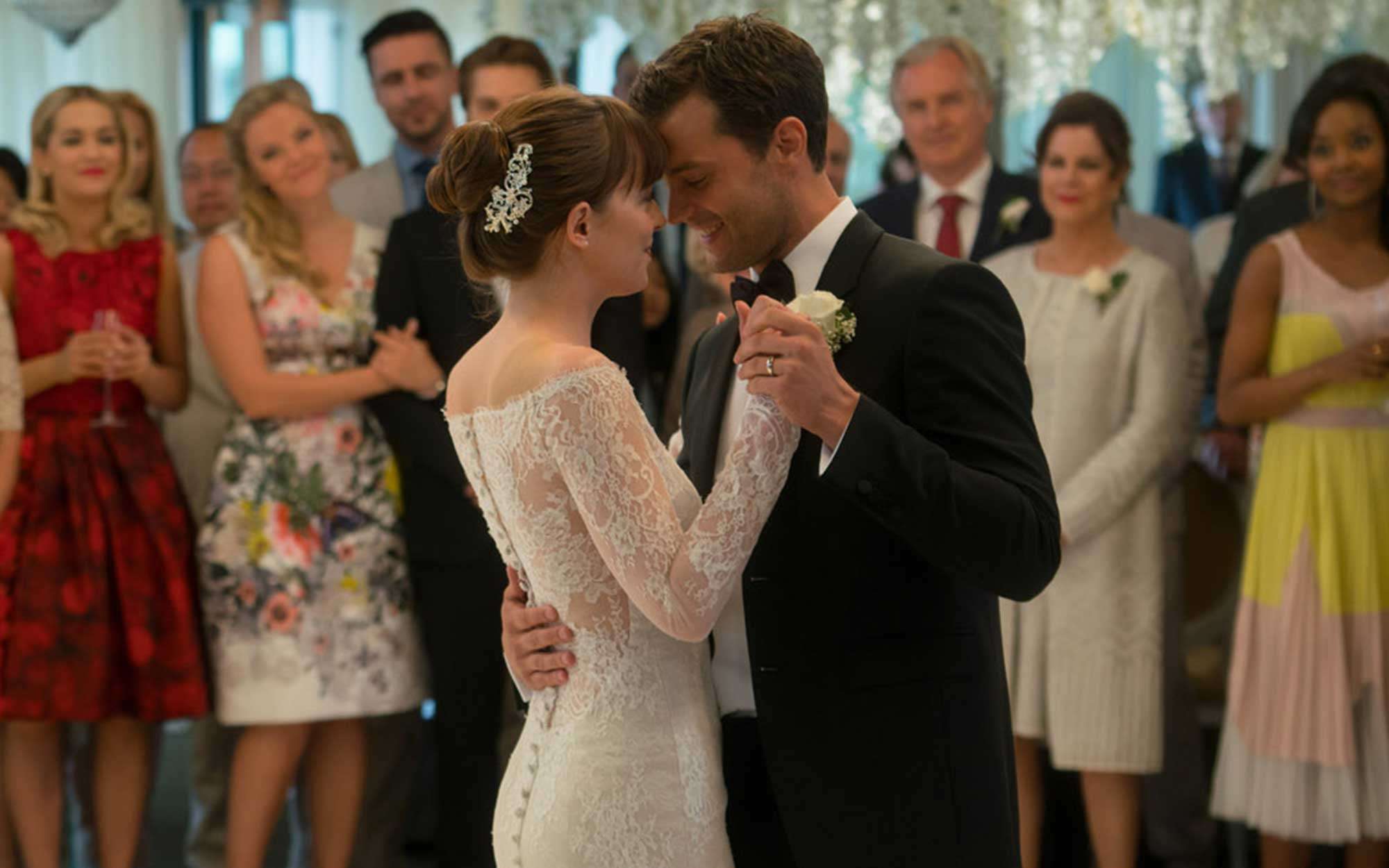 Mrs. Grey will see you now.

The third installment starts off with Christian and Anastasia's wedding—as you can recall, Fifty Shades Darker ended with a romantic marriage proposal. But the Greys' European honeymoon gets cut short when someone sets fire to the main servers at Grey Enterprises. The culprit? Jack Hyde, Ana's ex-boss at Seattle Independent Publishing (SIP) who got kicked out for sexual harassment. Jack's motivation for revenge isn't just Ana—apparently he has a past involving Christian that even Mr. Grey doesn't know about.

It's the most action-packed of the trilogy, with AT LEAST five sex scenes and a dozen hilarious AF lines. TBH, it's more of a rom-com than a porno-esque Twilight fanfic. Not complaining, tbh.

The 28-year-old actress is starring in a slew of upcoming Hollywood films: The Peanut Butter Falcon, Suspiria, and Bad Times at the El Royale. She most recently made headlines when she was spotted packing the PDA with Coldplay frontman Chris Martin.

Catch the 35-year-old actor in the film Robin Hood alongside Taron Egerton and Jamie Foxx.

The British singer-songwriter performed "For You" with Liam Payne for the Fifty Shades Freed soundtrack.

Eloise does mostly TV movies and previously appeared on So Undercover in 2012 starring Miley Cyrus.

The Canadian actor is set to join the cast of Vikings season six.

The actress is most known for her work in John Tucker Must Die and The Grudge 2 which were both released in 2006.

To be totally honest, I wasn't excited to watch Fifty Shades Freed. I already saw the first two installments—the first out of curiosity and the second for work. So, I went to the theater wishing I were anywhere else but there.

When the credits rolled in, I braced myself for another mindless erotica that'd cost me two and a half hours of my life. But, to my surprise, I was actually hooked. You see, apart from the steamy AF sex scenes and the cringe-worthy lines, there was a real love story being told. Anastasia Steele and Christian Grey were a couple trying to figure out married life as a team, with sex playing a supporting role in their marriage. I also noticed that Dakota Johnson and Jamie Dornan seemed to FINALLY enjoy themselves in the film (even if it's called acting).

Version 3.0 Ana was also a totally different woman from her character in the first film. She knew what she wanted and was unapologetic about it—even if it meant going against her husband's wishes.

For all those who think that Ana is a woman who will forever be a sub—think again. Even if Christian remains the dom in their Red Room, Ana is her own boss. I'm proud to say that in spite of all her character flaws, Anastasia Steele fits right in 2018.

Probably everyone in the Cosmo.ph team secretly judges me for loving this trilogy, and #noshame, I really do! I read all the books (except the ones with Christian's POV), and I was a Twihard for a (not-so-brief) period of my life. I always tell people who ask me about the movie: "Like the book, it's SO bad, it's good!" - Jillian

Anyone looking for a film that’s all about kilig, cheese, drama, sex, and female empowerment. If only you could watch it at home so you could be AS LOUD AS YOU WANT WITH YOUR SIDE COMMENTS! But if not, a fun movie night at the cinema with your best girl and boy friends would be a perfect way to end the long work week. —Jacinda

Watch it with your SO for sexytime ideas, or grab your most non-judgy girl friends for a night of snickering and giggling and OMG-ing! This movie's an entertaining escape—and that should be your mindset when you watch it! - Jillian