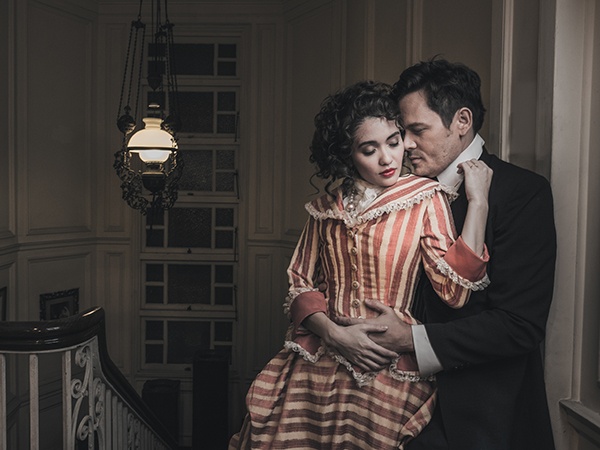 The Actors And Where You Last Saw Them:

Not a stranger to Repertory Philippines, she's been cast in the company's other comedies such us Leading Ladies and Boeing Boeing.

She's grown up with Rep starred in a number of their productions such as Snow White and the Seven Dwarves, Little Women and The Secret Garden.

The Fil-Am actor played the outspoken drug dealer Dennis Ziegler in Red Turnip's production of This Is Our Youth.

Hans has been in several Rep productions, including AUGUST: OSAGE COUNTY and Snow White and the Seven Dwarves.

1. Joshua Spafford made his acting debut with Repertory Philippines at the age of 17.

2. Caisa Borromeo and Cara Barredo were alternates for the role of Lexi in the jukebox musical Sa Wakas.

7. In the 19th century, doctors called female orgasms "hysterical paroxysms" because they probably didn't understand that women were supposed to feel good when they have sex. 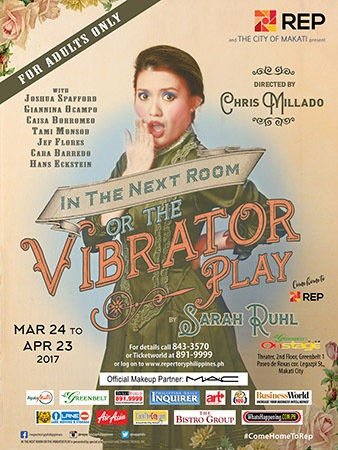 "I could actually relate to Dr. Givings," my friend said to me as we exited the theater. This surprised me considering the vast difference between the 1880s and the 2000s. When I asked him how, he said that it's easy to become wrapped up in your work—to be more practical than emotional. Obviously, a high sex drive isn't diagnosed as hysteria anymore, but the play also shows the importance of balance and harmony in and out of the home. Perhaps guys aren't as clueless as to think that women suffer from hysteria, but I guess people can still be pretty clueless about understanding how others feel.

The play also comments on gender roles. Catherine's role as wife and mother—and in turn, her womanhood—are compromised when her milk can't sustain the growth of their newborn baby Lotty. Catherine can't help but compare herself to Elizabeth (Cara Barredo), her wet nurse who feeds Catherine's baby with the milk of her dead son. What does it mean to be a woman if you can't do the things women are supposed to be able to naturally do?

I love how the play doesn't just dwell on this one kind of "hysteria." Mr. Daldry (Hans Eckstein) takes his wife Mrs. Daldry (Caisa Borromeo) to Dr. Givings so that he can cure her of her hysteria. Turns out, Mrs. Daldry is lezbehonest has the hots for the doctor's assistant Annie (Tami Monsod). Effeminate men like the artist Leo Irving (Jef Flores) need to be cured of their symptoms, even though feeling heartbroken over a fling is a perfectly legitimate reason to act crazy and depressed.

Overall, the play was an amazing experience, and there was never a moment when the audience wasn't dying of laughter. Though the subject matter may seem ridiculous now, In The Next Room (or The Vibrator Play) finds its success in creating humor where one doesn't think to look. The effect is pretty uncanny: we are immersed in the 1880s, where their culture is significantly different from ours. We find ourselves laughing at how strange the characters are, and yet towards the end, we see that we're not so different from Dr. Givings, Catherine, Mrs. Daldry, and the rest of them after all.


Here are some thoughts I had while watching:

"Were men really this clueless?"

"Catherine literally just wants sex, like why is that so hard?"

"Okay, that is an actual naked man on stage right now."

This is definitely an ADULTS ONLY show, and it might do some good to those who are uptight, tense, and quiet. The play shows the importance of letting loose and giving in to your inhibitions. This play is for anyone who finds it difficult to articulate what they want; trust me, when you watch this play, you'll realize how frustrating it can be to not be able to say what you’d like to say, and how relieving it is to actually let go and be yourself.