Meet The Hottest (And Youngest) Chiropractor In The Country!

When a 27-year-old husky doctor and former body-builder talks about his passion for ~*nerve supply*~, we're all ears.
by Ysa Singson | Jun 4, 2016
Post a Comment
Featured

As a kid, Gabriel Flores, D.C. (Doctor of Chiropractic) played for a national baseball team where he had to train to the point of exhaustion. That’s when he figured out how much the body is capable of. Today, he runs N8 Upper Cervical Chiropractic with his brother, and is the youngest chiropractor in the Philippines. 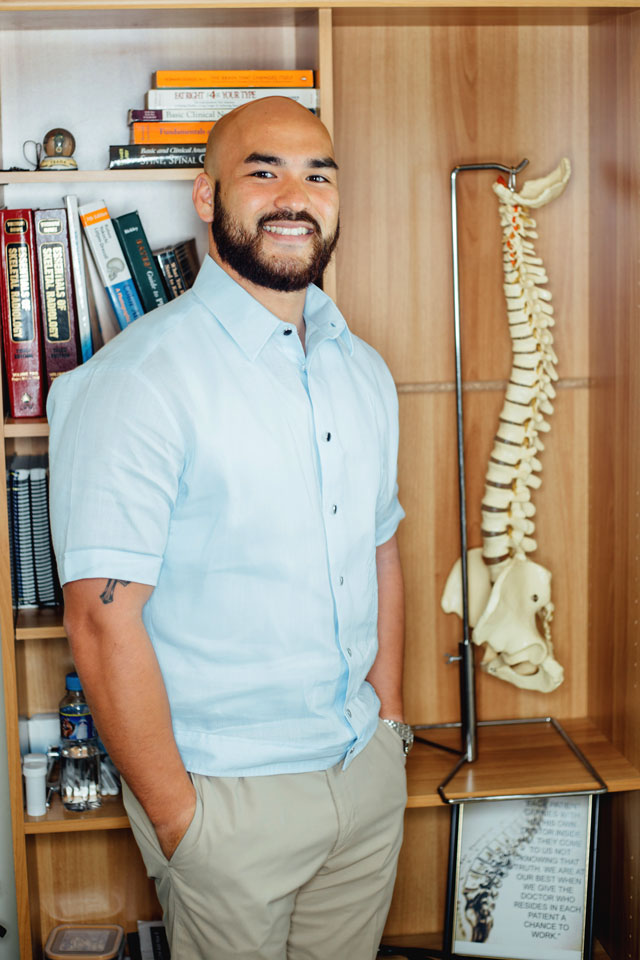 Have you always known you wanted to be a chiropractor?

I knew of chiropractic care because of my brother, but this was not something I ever thought I would end up doing. I was always interested in the human body and how it functions but I was geared towards personal training because I did body-building for a number of years. Because of that, my brother told me to check out this sports rehabilitation course at a chiropractic school in St. Louis, Missouri. At that point, I hit a wall—I didn’t know what I wanted to do so I just went with it.

I met a chiropractor that changed everything. As a child, I had exercise-induced asthma. I always had to carry an inhaler with me. When I met this chiropractor, who ended up being my mentor, he corrected my atlas vertebra and within two to three months, I realized that I no longer had to use my inhaler. It was such a profound moment for me. And it’s not like I’m saying that chiropractic care can take asthma away but it was more like it restored my health. I thought, if I can apply this to other people then their lives can transform just as much as mine did.

For those of us who don’t know much about chiropractic care, can you explain how it can tackle something like asthma?

Nerve supply! One component that people never think about when it comes to being healthy or being alive is nerve supply. I always say, ‘If I were to take a bone, a muscle, an artery, a ligament, a tendon, or a vein out of a finger, it would still be alive. Not for long but the instant that I take a nerve out of it, the finger will die.” That’s how important nerves are. It carries life. How well your nerve system functions will dictate how your health will be.

How do you respond to people who say that chiropractors aren’t “real” doctors?

If you compare the curriculum in chiropractic school and medical school, one will find that the hours spent in basic and clinical science courses are similar. Medical doctors will learn how to diagnose and treat the symptoms of the body with medication while chiropractic focuses on correcting the cause of the problem and keeping the body well. The root meaning of the word Doctor means "teacher.” It never means "healer.” Both forms of health care are important according to needs of the patient. In the end, it really doesn't affect me. That's their opinion and they have every right to have it.

How do you deal with people who are anxious about chiropractic?

I understand the anxiety but I always reassure them that there will be no popping or twisting. It’s a very precise adjustment. It’s non-invasive. Put it this way: When you sneeze, you put five times more pressure on your spine than the correction itself.

What made you decide to take your career here?

It was a combination of different factors. For one thing, there are already too many chiros in the U.S. Here, I can count them with both hands. Being in the States alone, I also missed my family. We’re very close. Of course, it also helped that my brother already had his own clinic here. It seemed like all signs pointed to moving back here. What really affected me was seeing the effects of typhoon Ondoy. Something in that moment made me want to help. I wanted to give back to the people and to my country. My overall purpose is to serve.

How do you maintain your health and keep fit?

I love going to the gym. I enjoy lifting, which is much healthier than what I used to do which is body-building. I’ve done two body-building competitions in my life. Each time, I felt like I was dying. It’s very hard on your body. The months leading up to the show, it’s doable. For the most part, you’re very healthy. You eat a lot of greens and good carbs, but an abnormally high amount of protein. It’s definitely not sustainable. The body can only take so much stress. Your kidneys and liver have to go through so much. During the last week before each competition, you basically dehydrate yourself. You suck on ice chips because you can’t drink because you need your skin to be paper thin. In a way, it’s like self-mutilation—all for vanity. If I was going to be serious about chiropractic care, I had to give that up.

One thing I look for in a woman is independence. I want a girl who has all her stuff together, but I know everyone has baggage. As long as the girl can carry herself well, that’s enough. I also prefer someone who smiles a lot. It’s more attractive than someone who could look like Megan Fox but is a bore. Charm over beauty, definitely.


What are your thoughts on body positivity and body love, especially in your relationship?

I understand that the media only really appreciates a certain kind of look. Everyone has to be stick-thin. Everyone has to be really white. I never put that kind of [pressure] on my girlfriend. I’ll never tell her that she needs to wear makeup. I really think that a beauty of a woman can be seen without it.

But I also think that a woman should love herself first. Know your self worth because that can’t be told by anyone but yourself. Only you can get past whatever negative train of thought you have. It’s more about changing your mindset and not listening to what the media’s saying.