The Ending Of Dark Comedy 'I Care A Lot,' Explained

I thought the movie was over about three different times.
by Hunter Levitan | Mar 4, 2021
Post a Comment
Featured

***Warning: this article contains so. many. spoilers...in case it wasn't obvious from the headline.***

If you were completely stunned by the whirlwind ending of Netflix's dark comedy I Care A Lot, you are not alone, my friend. The last 15 minutes of the movie are jam-packed with tons of action and mind-bending plot twists. Every time I tried to register WTF just happened BAM! something even crazier went down. I mean, Rosamund Pike didn't win the Best Actress Golden Globe award for nothing!

I Care A Lot isn't a throw-on-in-the-background type of movie. Quite the opposite, in fact. Its intricate plot requires your complete focus, and there's no shame in rewatching the last couple scenes at least a few times. Adversaries team up, there's an unexpected gunshot, a lot is going on! If you're trying to process the ending and make sure you understand what it all means, you've come to the right place.

But before we fully dive into the ending of I Care A Lot, let's recap the last little bit of plot. After scammer Marla Grayson (played by Pike)...

1. miraculously dodges death by kicking her way out of a fully submerged car,
2. saves her partner Fran (Eiza González) from monoxide poisoning,
3. escapes her home right before it explodes into flames,
4. sneaks her way through security to drug and kidnap her nemesis Roman Lunyov (Peter Dinklage),
5. leaves his naked body in the woods,
6. and blows up his car,

...you'd think director J Blakeson would call out "That's a wrap!" But, alas, no.

Being the ruthless con artist she is, Ms. Grayson exacts her revenge so that it's highly beneficial to her. Aware that Lunyov has been in hiding since public records show he "died" seven years ago, Marla knows that when he arrives at the hospital, they'll identify him as a John Doe. And thanks to our (effed-up) legal system, John Does are appointed court-issued guardians...and wouldja look at that, Marla Grayson is his guardian now!

But just when you think it's all over now that Marla has wrangled complete control over Roman and his mother, we get hit with another major twist: Roman convinces Marla to become business partners so they can scam the entire world with her fake guardianship program. Roman reunites with his mom while Marla gains international fame and makes bank. It's a pretty damning portrayal of how capitalist society always rewards greed, but that's a think-piece for another time. The end.

In the plot twist to end all plot twists, Marla walks out of an interview and is about to drive off in a fancy sports car with Fran, but then, out of nowhere, the man (aka Feldstrom played by Macon Blair) from the beginning of the movie suddenly appears in the parking lot.

Allow me to clarify who this man is: Remember the very first scene, where we see Marla in a courtroom being accused by a man of swindling his mother? And he spits on her and calls her a "bitch" outside the courthouse, which prompts her to make a very graphic and painful threat? Well, that's the same dude who shows up at this moment, and he's once again screaming at Marla, this time outside the TV station. 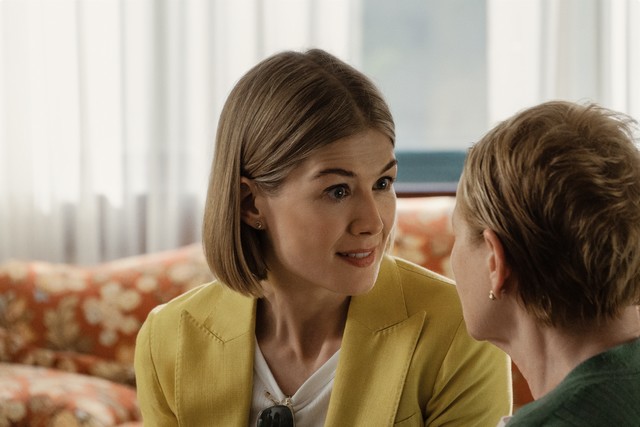 Marla, wearing a fabulous white suit and looking like a million bucks (which is probably how much she's worth now), spins around in annoyance—and the man shoots her! in the heart!!! Fran rushes to her side and tries to stop the bleeding, but Marla's eyes drift to a close. Aaaaand SCENE.

Yep, that's the real end of I Care A Lot. Of course, it's not entirely clear whether or not Marla has died from the bullet wound, but it seems like she probably has. So what does it all MEAN, you ask? Some viewers felt like cold-blooded murder was just the kind of justice that Marla deserved, while others were more ambivalent—did her murder make her some kind of messed-up criminal mastermind martyr? For what it's worth, here's what director J Blakeson told Cinemablend:

"What I like about the ending… is that I think it's the kind of thing that people think they want, and they sort of enjoy it, but then hopefully like five minutes later, it leaves a bittersweet taste in the mouth of, 'Should I want that? Should I enjoy that? What does that mean?' There's conventions of cinema and things about rooting for people and empathy, and it's interesting that it's all laid in there."

It sounds like Blakeson wanted you to feel conflicted about the emotions that Marla's murder dredged up. Even if you now "understand" the ending of I Care A Lot, there's still loads to unpack, so you might want to phone a friend and debate all the intricacies over a bottle of wine.