One of this year’s 69 “bad boys”, the mestizo hottie has officially gone the showbiz route.
by Cheekie Albay | Dec 4, 2009
Post a Comment 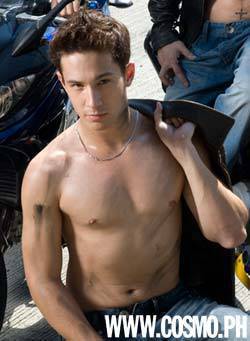 One of Starstruck V’s Final 14—the cream of the crop of aspirants who auditioned far and wide just to make it to the artista search—Ian Batherson is familiar to Cosmo chicks after he appeared as one of the 69 Cosmo Bachelors for 2009. The part-Filipino, part-British, part-American, and part-Scottish hunk is a certified head-turner, given that he’s tall, fair-skinned, and chiseled—the ultimate mestizo. No wonder he is already considered by his peers in the star-making reality show to be a big threat this early in the race, which officially begins now that the 14 finalists have been named.

As a member of the 69 Bachelors, Ian gamely poses topless and answers Cosmo’s flirty, naughty queries. He’s proud to say that that he’s a good catch because “I have a certain mysteriousness, I have many talents, I make girls laugh, and I’m confident.” He believes that his sense of humor is his sexiest trait.

Although only 20, Ian has a maturity that belies his age. When asked by Cosmo what makes a woman attractive to him, the showbiz hopeful replies, “I love a pretty face, but I also love intellectual and witty women who have a sense of humor.” He goes as far as saying that he would choose brains over beauty.

Ian even shares this helpful relationship tip for girls: “Don’t be too clingy—show [him] you’re interested, but not desperate.”

Before his stint as a Cosmo Bachelor, Ian already had some modeling experience under his belt, most notably the Greenwich Lasagna Supreme TV ad where he plays brand endorser Anne Curtis’s ex-boyfriend. Later, he would find himself sharing the screen with KC Concepcion for the Close Up Halik Meter Challenge TV campaign. He is managed by Mercator Model and Artist Management, the same group that handles the careers of in-demand models like Akihiro Sato and Daniel Matsunaga.

Now this Cosmo Bachelor is poised to make that leap from model to artista, with Starstruck V as his jump-off point.