Iya Villania And Drew Arellano Are Having A Baby Soon! 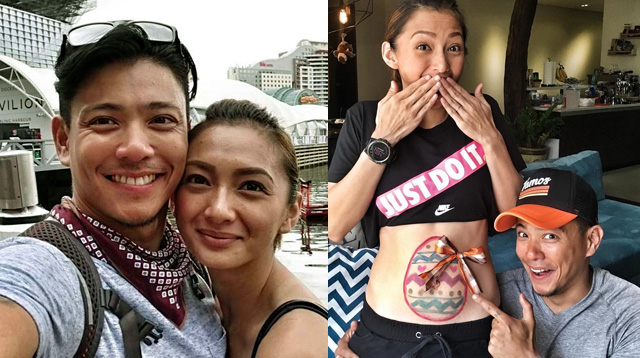 1 Drew Arellano and Iya Villania shared the good news of Iya’s pregnancy on their Instagram accounts on March 27. And because it was Easter Sunday, the two even used puns. “I found an EGG... and FERTILIZED it! Hahahahaha! Wohoooooooo! Happy Easter it is! #EGGspecting #EGGciting #ComingSoon,” Drew wrote. How cute! Congratulations, you guys!

2 Speaking of babies, check out this ADORABLE photo of Marian Rivera and Dingdong Dantes’ unica hija, Maria Letizia! The family went on a trip to the beautiful island of Busuanga, and here’s the tiny tot soaking in some sun. How pretty!

3 Angelica Panganiban caused confusion among her Instagram followers after she posted this photo of her wearing an infinity ring. “To Infinity and Beyond #FinallyImHomeKong,” the caption read. After several fans commented to ask if she was engaged, the actress replied saying “Ay, hindi ako engaged. Infinity ring po. Hindi solo diamond ring. Sorry naman sa confusion.” (PEP)

4 Happy birthday, Kathryn Bernardo! The former Cosmo cover girl turned 20 years old on March 26. Kath’s on-screen love team and rumored boyfriend Daniel Padilla did this simple birthday greeting for her on the beach, as captured by their good friend Patrick Sugui. Daniel wrote “Happy birthday Bal!” on sand. “Bal” is a nickname the young actor calls Kath. Rumors say that the two are currently enjoying some time together in Balesin.

5 Remember that ridiculously hot math teacher named Pietro Boselli? Reports say that he just landed a modeling gig for Giorgio Armani’s athletic line! What’s crazier is that he actually modeled for the same brand back in 1995 for their children’s line.