JC Santos denies allegations of his supposed relationship with his stylist following the news of his breakup with theater actress ex-girlfriend, Teetin Villanueva. This week, a comment on Teetin’s Instagram post saying "he can’t be trusted" exploded into speculations of a third party causing the breakup.

The post in question was an image with the text "Time discovers truth." 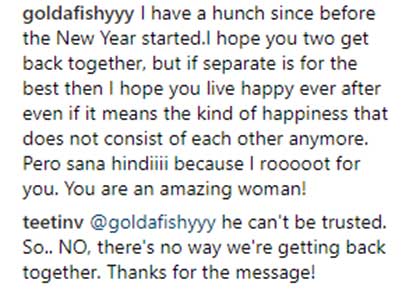 Teetin fanned the flames by dropped another comment: "She’s just one of the many," pertaining to JC and his stylist allegedly spending time at the beach together.

In an exclusive interview with PEP.ph, JC apologized to co-workers who may have been dragged into the controversy, including Ryza Cenon (Mr. and Mrs. Cruz) and Bela Padilla (100 Tula Para Kay Stella). JC believes that his statement that their relationship is on the rocks led his now ex-girlfriend to react on social media. He said, "I’m sorry sa lahat ng mga na-involve, pasensiya na. It happens."

When asked about the comment that he cannot be trusted, he replied, "Wala akong masasabi about that. Kung 'yun po ang opinion niya, e, di 'yun lang po talaga."