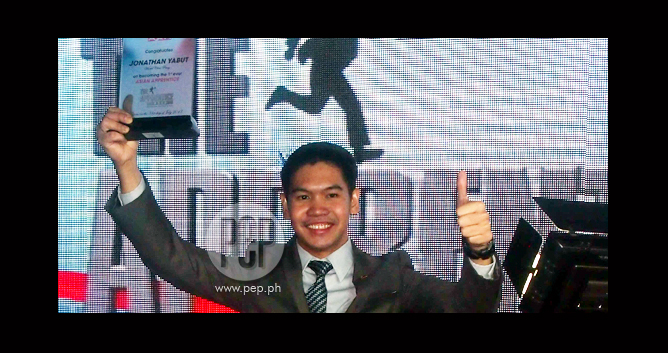 University of the Philippines Economics graduate Jonathan Allen Yabut still could not believe that he won the first season of The Apprentice Asia.

The first-ever winner of The Apprentice Asia is proud to have raised the Philippine flag on the marketing and business industry with his victory.

“This is for the Philippines. It’s a win not about me.

"And finally, pagdating sa kumpetisyon na pagalingan sa utak, pagalingan sa business and marketing, the Filipino has finally spoken that we are the best in Asia,” Jonathan told PEP.ph (Philippine Entertainment Portal) and other members of the press during the special screening of The Apprentice Asia at Hyve Superclub in Bonifacio Global City last July 31.

Admittedly, Jonathan said he was confident that he would win the competition before Mr. Fernandes announced the winner—until the Malaysian entrepreneur said that he is going to “change his mind” in choosing his apprentice.

“Coming into the board room, I thought Tony would be choosing me and then when he said, ‘I am changing my mind,' I thought he really wanted to vote for Andrea.

For the full story, visit PEP.ph