July 9, 2014 Conversation Starters: You Have To Watch The End Of The Trophy Wife Trailer + More!

1 We have to admit, we got super excited when we saw the trailer for The Trophy Wife, starring Heart Evangelista, Cristine Reyes, and Derek Ramsay. It seems like just another bitchy chick flick—until the catch in the end just made us go OMFG?!

3 Alright, Potterheads, y'all are probably going to D-I-E once you hear that J.K. Rowling just published a piece called Dumbledore's Army Reunites on Pottermore on July 8. The 1,500-word story focuses on a 34-year-old Harry Potter—attending a quidditch match with sons James and Albus. It's written in the perspective of journalist Rita Skeeter, who hints that there could be trouble in paradise for Harry and his wife Ginny! WHAT! (Check here for the full story!)

4 Speaking of Harry Potter! Movie alum Emma Watson signed up for a major new role—but it's not what you think. The actress was appointed United Nations Women Goodwill Ambassador, which is dedicated to further gender equality. "The chance to make a real difference is not an opportunity that everyone is given and is one I have no intention of taking lightly. Women's rights are something so inextricably linked with who I am, so deeply personal and rooted in my life, that I can't imagine an opportunity more exciting." YOU GO, GIIIIRL! (Independent.co.uk)

4 Getting hitched soon? You might want to join Belle De Jour's Passion Series: Here Comes The Bride! 30 blushing BDJ Girls will get insider tips on grooming, intimate wear, and makeup on July 12, Saturday at Greenbelt 5! Interested? Check out the mechanics below (or visit this link), so y'all can join in on the fun, too! 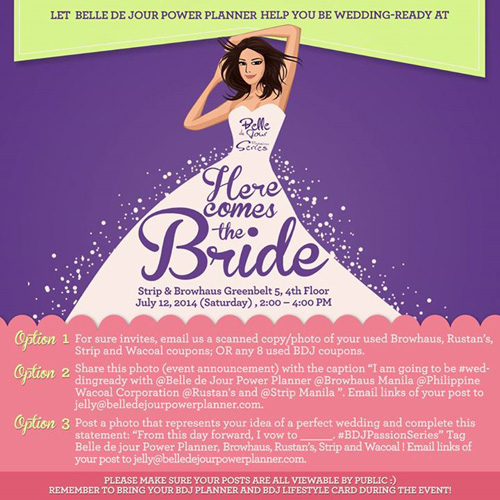