Justin's Body Language With Hailey vs. Selena: A Comparison

Reports of Justin Bieber's abrupt engagement to Hailey Baldwin only seem sudden: Sure, the duo, who was rumored to be dating in 2016, appeared to get back together just few weeks before upgrading their relationship status. And yes, they got coupled up just a few months after Justin appeared to part ways with former girlfriend Selena Gomez, shortly after they'd allegedly rekindled their romance after some time apart.

But because Justin himself sang "spend a week with your boy I'll be calling you my girlfriend," true fans should have seen it coming. And the same could be said for body-language expert Blanca Cobb, who says Justin's interactions with his ex-girlfriend were very different from the way he's been behaving around his future wife.

Justin trails behind Selena rather than walking by her side. He leads with his right foot while she leads with her left. "They're just not in sync," Cobb says, surprised to see no hand-holding or any hint of physical closeness. "To me, they're two strangers walking into a building at the same time. There's no passion—none at all."

Justin walks shoulder-to-shoulder with Hailey. Even when they aren't holding hands or looking at each other, Cobb notes, they're much closer together, as you'd expect from two people who are attached to one another. They also lead with the same foot—the left—which shows they are in sync. "He looks physically closer to Hailey," Cobb says of Justin's stride. "Their body language definitely says they're [emotionally] closer."

Justin Bieber intertwines fingers with Hailey Baldwin, but not with Selena Gomez 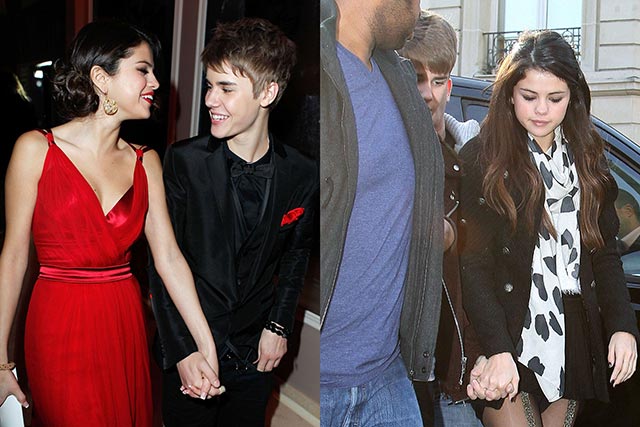 Above are two instances in which Selena has the upper hand—literally: By crossing her arm over Justin's to clasp his hand from above, she asserts herself as leader in their relationship, according to Cobb. "Every couple has to define themselves," she says of establishing dominance within a partnership. "But over time, this can cause some problems in a relationship."

In both photos above, there are other signs of strain: On the left, Justin slips his left fingers into his pants pocket, which hints at discomfort, Cobb says, also noting the way he keeps his left elbow close to the body, as though he's trying to make himself smaller. "It's like his body is imploding on itself—something isn't right," Cobb says, looking past his facial expression. "The easiest thing to fake is a smile."

Meanwhile, on the right, there's tension in both Selena and Justin's fingers. "When you apply pressure with your fingers, there's usually some anxiety," Cobb says, although this could be situational rather than a reflection of relationship issues. 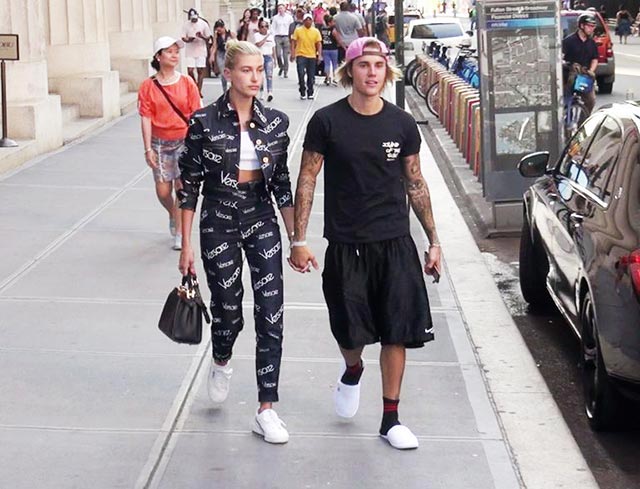 Here, Hailey and Justin interlock fingers, and look at that: Justin's hand is in front, meaning he's taking the lead in this relationship. There's no apparent tension in either partner's hands or body, and Justin looks markedly more relaxed, with his arms held away from his sides. "When you're confident, you take up a lot of space," Cobb says, begging a question: Could this have something to do with the pride he takes in his partner?

Despite Hailey's stoic expression and Justin's nonchalance, Cobb insists this couple is super in sync. After all, they both lead with their left legs, and their stride is a similar length. They also hold their personal items—Hailey's bag and Justin's phone—in their outside hands so as not to distance themselves from each other. "Nothing is getting between them, and that's what you see with happy couples, even if their faces don't reflect it with smiles," Cobb says. 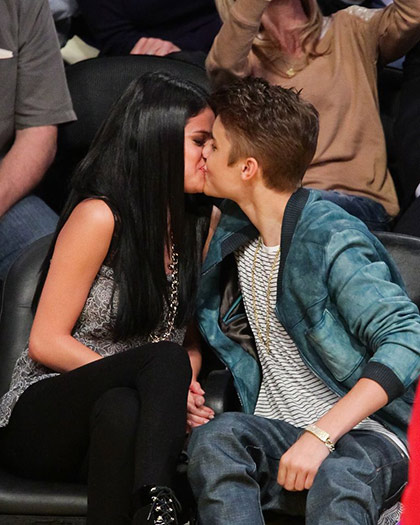 Although the photo above was taken eight years ago, when Justin was younger, Cobb doesn't need to card either celeb to see this kiss for what it is: "It's puppy love," she says. "It's different from mature love, and it's not as developed."

Never mind that their noses, lips, and chins appear to be smushed together, while Justin keeps his hands to himself and Selena's spine remains erect, just barely leaning into the kiss. "I wouldn't say, 'whoa, they need to get a room,'" Cobb says—mostly because Justin's eyes appear to be open, and, by the corners of their mouths, you can tell both Selena and Justin are smiling. "You don't smile while you kiss when there's a lot of passion," Cobb says.

"He's in control of this kiss," Cobb notes, which is consistent with the way the couple holds hands, with Justin taking the lead. "He's leaning down toward her, and she's tilting her head more than he does, which exposes a vulnerable part of her body and conveys comfort and trust."

Although there's no soundtrack on this Instagram, the couple appears to be dancing as Justin pulls Hailey close—see the curve of his fingers? He's gripping her, pulling her close to his chest, Cobb notes. "This is a lot more passionate than his kiss with Selena."

The Bottom Line: Justin Bieber carries himself differently around Hailey vs. Selena Gomez

"What he had with Selena was probably important to him at that time, but your views of love and how you express it change over time and with experience as you get older," she says, by way of explanation.

That said, she never could have guessed that Justin's fling would become his bride so readily. "Body language can give you a sense of how affectionate people are with each other and how they feel about one another, but when they make the decision to get engaged, there's a lot of talking about values and dreams that you don't see."