The Biebs is in the spotlight yet again after his super shady Insta-feud with ex-girlfriend Selena Gomez. After Justin posted a snap of him with his rumored new girlfriend Sofia Richie, fans started hating on Sofia so much that Justin threatened to put his Instagram on private because things were getting out of hand. “I’m gonna make my Instagram private if you guys don’t stop the hate this is getting out of hand, if you guys are really fans you wouldn’t be so mean to people that I like,” he wrote. 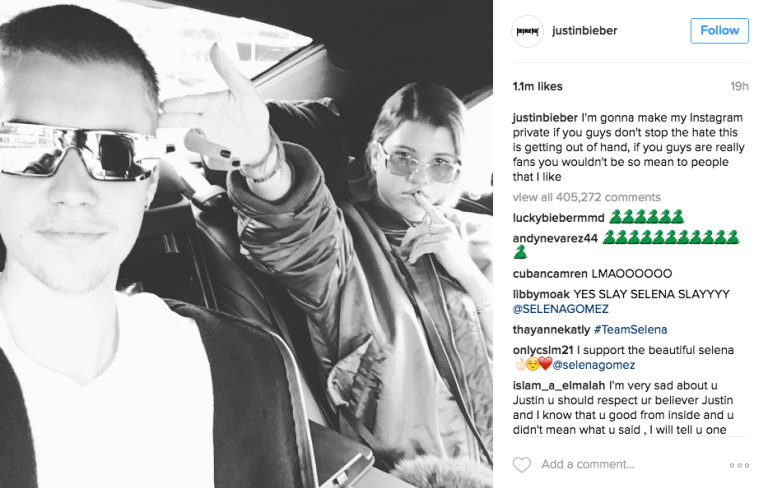 Sel stepped into the picture after she allegedly left a comment saying, “If you can't handle the hate, then stop posting pictures of your girlfriend," she wrote. "It should be special between you two only. Don't be mad at your fans. They love you and supported you before [anyone] else did.” (We have the receipts here, btdubs.)

Just a day after the incident, it finally happened: Justin has put his Instagram on private—for like 10 minutes, that is. Oh Justin, you little troll you!

People on Twitter were quick to react to the Biebs’ move:

@justinbieber what was the point of putting your Instagram on private like are you gonna block your 77m followers??

@justinbieber you can literally disable the comments if you don't want hate.... That's why Instagram added that feature. Why so extra?

And then he briefly set his account on public again:

Until FINALLY, he deleted his Instagram account COMPLETELY. There's a trending Twitter hashtag on it, too: #SelenaEndedJustinParty. Reports say his Snapchat has been set to private as well.

At this point, no one knows if Justin actually deleted his account. He may have gotten hacked? We're not sure? Help?