The ~miracle~ in their lives are their MIRACLEs! 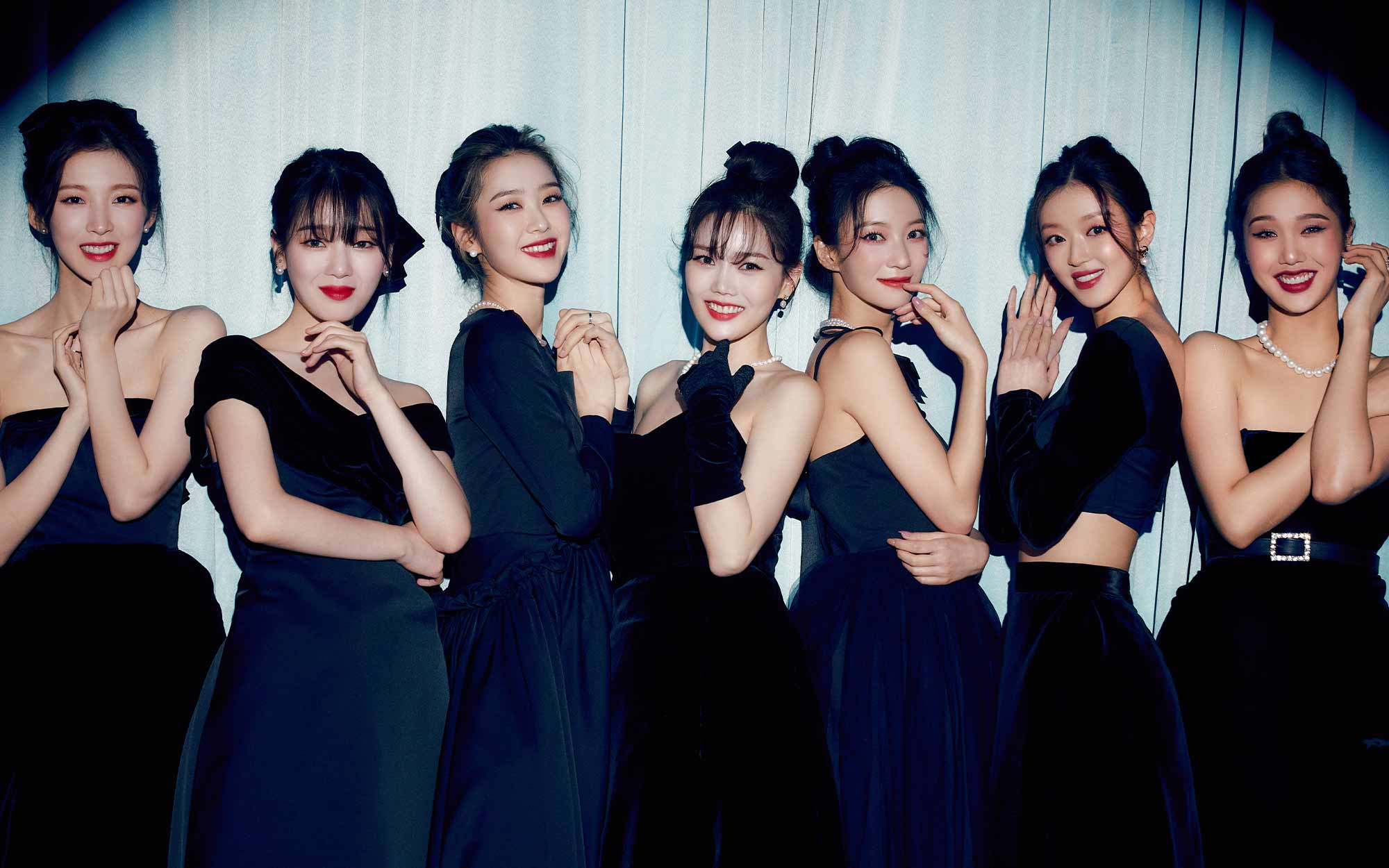 A feel-good K-pop playlist is never complete without OH MY GIRL's "Dolphin." When I first listened to this song (thanks to my friend who recommended it), I could imagine myself sipping a glass of orange juice by the beach. "Dolphin"—along with OH MY GIRL's other tracks—is like a slice of spring and summer combined. The group's whimsical combination will definitely cast a spell on you.

Get closer to the girls

For those who are new to the fandom, OH MY GIRL made their debut in 2015 as an eight-member group under WM Entertainment. Two years after, they became a septet as JinE left due to health issues. The group now consists of Hyojung, YooA, Seunghee, Jiho, Mimi, Yubin, and Arin. When asked about the artists they look up to, OH MY GIRL didn't think twice about saying that it's their sunbaes (seniors) who have been and continue to be active in the industry as they help the K-pop industry grow to the next level.

Leading the group is Hyojung who describes herself as someone with a bright personality and who doesn't overthink. The 27-year-old (international age) has always wanted to be a singer since she was young and she grew up belting out songs by Girls' Generation, Wonder Girls, and miss A. She also had fun dancing to their choreography, and this made her want to become a K-pop idol someday.

YooA is a true-blue Virgo—she's detail-oriented, sentimental, and has an effortless kind of charm. Like Hyojung, she spent her childhood listening and dancing to K-pop songs on TV and streaming sites. According to her, it was music that gave her strength during her dark days and she'd like to do the same to others now that she's an idol.

The playful and meticulous Seunghee mentions 2NE1 as her inspiration in pursuing a career in K-pop. She enjoyed singing during her childhood but it was in middle school when she decided to make things happen: Seunghee came across one of the iconic group's performances and, not long after, she was immediately hit by the desire to become a charismatic artist just like them.

A girl with a mindset that can never be changed once she focuses on something, Jiho is the type who knows what she likes in life and is consistent in whatever she does. Like when she realized that she wants to become a singer who can bring happiness to others through music. Remember the Full House OST "I Think I" by BYUL? It was this track that gave her a huge sense of comfort and the rest, as they say, is history.

As someone who wants to express herself through personified memes (her nickname is Ribbon Mimi because fans have noticed that she wears a ribbon during her performances!), you can expect Mimi to be a dynamic soul. It was her friend who saw her potential in the entertainment industry and she then started working hard towards her goal of becoming a K-pop star.

Count on Yubin (formerly known as Binnie) to always have fun when she's on stage. Even when she was still a child, she has always enjoyed singing and dancing in front of everyone, and being able to do it on a larger scale brings her so much joy. This resonates with her character IRL because Yubin is easygoing yet consistent.

Arin's K-pop idol dream started when saw IU, Girls' Generation, and Suzy. She enjoys watching them on Korean music programs and this developed her interest in the field of arts. OH MY GIRL's maknae has a bright personality but she admits that she tends to worry easily. Whenever she's done performing or filming a drama (ICYDK, she's an actress, too!), her mind is consumed with thoughts of how she could've done better.

As their name suggests, OH MY GIRL wants to remain as everyone's girl in their hearts. The group's main theme is youthful but it's not always the case: The concept queens are never afraid to try new and colorful interpretations. From cute and bubbly to bold and becoming, you will look forward to their different sides in every comeback. In fact, one of their choreographies featured zodiac signs! The girls have already shown a fairytale-like theme, a sultry-slash-retro image, and a ballet-inspired concept. You can say that they've been there and they've done that. Despite their versatile style, OH MY GIRL's core will always be delivering energy that uplifts anyone's mood—and this will never change.

"We want to be recognized as artists who send a positive message to many people. Our goal is to be remembered as idols that give strength and hope in seeing a better tomorrow," said Mimi to K-loka by Cosmopolitan Philippines.

The members have distinct personalities and this results in the group's strong identity. There's no denying that the synergy is there when they perform in one stage and that's because behind the scenes, they genuinely take care of each other. And so, they want to do the same for their fans.

"I remember there was this one time when the music was suddenly cut off, but all of us continued to carry out the performance without the music until the end. It was just so moving for me to see that our hearts were connected," recalled YooA.

She continued, "We want to consistently show an approachable and comfortable side to us. We hope that we could be like a warm, tight hug for those who are having a difficult time. Like a friend who could share happiness with others. I want us to remain as a group that has naturally become a part of people's daily lives."

Listen to their story

The K-pop idol life is not always rainbows and butterflies. Pre-debut, there are the years of training required. Once a group gets to finally perform on stage, there are inevitable challenges, too. In particular, some of the members of OH MY GIRL had to sit out promotions because of repetitive injuries, sleep apnea, and hyperventilation due to stress. They also had to endure the countless malicious posts they receive online. One time, they even got involved in a car accident.

Looking back at what they've been through, Jiho thinks that the struggles helped the group grow but it doesn't mean that things are easier now. "There are obstacles that we're challenged with even today, and it's not easy to overcome them. So we're always doing our best."

Out of all the hardships they've experienced, Seunghee highlighted that the most difficult would be their situation during the pandemic. "I realized that I tend to energize myself through our fans as we interact with them. But because we couldn't see them, I feel that this was a tough period for me."

OH MY GIRL is known for releasing hits after hits. Their songs are so catchy that you'll be memorizing the lyrics and humming the melody in a heartbeat. Some of the tracks that solidified their status are from their 2020 album NONSTOP, which topped the charts. Hyojung told us that this comeback is their greatest achievement so far and it gave them goosebumps.

"The moment when we placed no. 1 on music charts while we were doing our NONSTOP showcase was the most memorable to me. We didn't know that we had charted because it happened while we were doing the showcase, and the fact that we did feels like a dream. We were all so surprised. Also, when we found out through the news that our song was the longest-charting out of the girl groups, that also felt extremely surreal. We are so thankful that "Nonstop" was played everywhere and for having people recognize us, but having such an accomplishment showed just how loved the song is, which made this even more unbelievable."

Apart from sweeping music charts, OH MY GIRL's string of success includes their sold-out events. It only took three minutes until tickets for their first solo concert were all purchased! They broke records for the fastest sold-out concert for a rookie group in 2016, and take note that it's only been a year after their debut.

On the song that best represents them, Arin relayed that it's "Dun Dun Dance" because it matches OH MY GIRL's image so well. "It's a song that people always mention to us wherever we go. I choose 'Dun Dun Dance' because even some of my seniors who don't listen to K-pop complimented us and told us that they heard our song, so it really made me realize that we are loved by so many people."

One would expect that there will be a lot of pressure for their next album release because they're hitmakers, but OH MY GIRL thinks otherwise. It's because more than the goal of ranking in music charts, they're after making MIRACLEs (the fans) happy. "I don't think we're pressured with each comeback. Just as we have done so far, doing our best for the fans who are waiting for us and sending us unconditional love is what we can do for them. There was more excitement about showing new sides to our fans rather than pressure," said Yubin.

Seunghee added that it's gratitude that keeps them going. "I am just so thankful that a lot of people love our music. I think I continued to move forward with the only thought of trying to give back the love we received with better music."

This is real love

OH MY GIRL can make anyone feel good with their impressive discography but what makes them the happiest is the support from their fans, according to Hyojung. "I think that we get the courage and strength to move forward when we feel the support from fans in many ways such as through letters and comments. I also think that the fun moments I have together with the members are also what gives us strength."

The group just made their comeback with the single "Real Love" and if they can define what real love means, Jiho shared: "I think it's the love that MIRACLEs give us. In the past, there was a letter I received from a MIRACLE that said, 'I can't help but like you no matter what,' and I really felt so much love from those words. I think it's a blessing to receive such unconditional love from someone and it's not something that is easily found. But I'm receiving this kind of love from MIRACLEs, and I think that's what real love is."

*This interview has been condensed and edited for clarity.

SPECIAL THANKS TO: WM Entertainment and Sony Music