You could say, they are 'chained to their phones.'
by Peggy Truong | Mar 12, 2017
Post a Comment
Featured

Katy Perry and Orlando Bloom are still friends who text and talk, according to a new report from E! News. According to the site, Orly is so "cool" with his ex that they still spend time with each other since announcing their breakup Feb. 28. One source says that despite this level of post-breakup coolness, Orly is "just not ready for a serious relationship," but there may be hope for a reconciliation. "He cares deeply for Perry and they have a very carefree dynamic with each other. They are both free spirits."

The report echoes Katy's tweet March 2, when she slammed the media for suggesting that their breakup was messy. "HOW BOUT A NEW WAY OF THINKING FOR 2017!? U can still b friends & love ur former partners," she wrote.

As E! suggests, it's possible that their ongoing friendship is the reason Orly dog-sat Katy's dogs on the same night she performed at the iHeartRadio Music Awards (the same night she had quinoa in her teeth, BTW).

Katy and Orlando, who first started dating shortly after the Golden Globe Awards in January 2016, issued a joint statement through their reps last month confirming their split: "Before rumors or falsifications get out of hand, we can confirm that Orlando and Katy are taking respectful, loving space at this time."

Their last public appearance as a couple was at the Vanity Fair Oscars party Feb. 26. 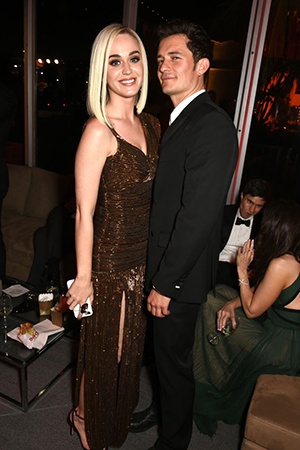